As advertised, the TGV, or Train à  Grande Vitesse, from Marseilles to Paris goes really, really fast. In three hours, we’ve covered the 750 km and were soon navigating the Paris metro for the first time on our way to the IBIS Montmartre Hotel. By late afternoon, we make the rendezvous at the Sacre Coeur with 10,000 of our best tourist friends. After our time on the islands, the crush of humanity is daunting but nothing like what is to come. Still, the hustle and bustle tells us Paris is open for business.

Along the walk to Sacre Coeur, we see a placard promoting a free performance of Antigone at an outdoor theatre tonight! So, with baguette sandwiches and wine in the “sac à dos,” we’re off to the performance. The actors switched back and forth from Italian, French and Spanish rather than telling the story in the universal language – American. Tant pis, but it was a beautiful May evening and a great introduction to the city, and that’s what counted.

Tuesday morning and we’re off to pickup our Paris Museum Passes and then have a bit of a walkabout. But before we walkabout, let’s examine the size of this city.

The City of Paris proper (the circular area with all the cool stuff in it) has two million people stuffed inside along with 1 million dogs pooping on the sidewalks. The greater metropolitan area has 12 million people (you can do the math on the number of dogs) and covers 1,000 square miles. If you’ve been keeping up on the blog, you know that this means greater Paris is 1/3 the size of the entire island of Corsica but has 36 times the population. This place is really, really big. Thankfully Paris is mostly flat, so having walkabouts should be a breeze.

After our first walkabout, our legs feel like jelly. A look at our handy tourist map shows how little of the circular area we covered. This place is really, really big. That night we vow to walk as little as possible in search of food. Around the corner from the hotel we find an Irish bar where beer is served… mission accomplished. Using my best French, I ask what beers are on tap. The bartender, using his best Irish, asks me where I’m from. Using my best American, I reply, “The States.” “All right then,” he says, “let’s stop pretending.” For the next three hours, we have a hilarious time with the bartender, Tony, his Finnish wife, along with a Paris policeman (who is super funny), his Irish wife and Rudy, who is a friend to all. Near the end of the night shots of savory liquor appear. Twenty minutes later Natalie and I are glad the hotel is just around the corner. Sleep is going to be a good thing.

The next morning…. STOP! Let’s depart from the chronological format. Shall we?

Next up?  Bike tours, museums, Versailles and funny things about Paris! Vas-y!

A couple we met in Corsica from Bozeman, recommended the Fat Tire Bike Tours of Paris. We booked the day and night tours since each has a different focus. The weather forecast was for sunny skies!

The day tour started… and continued… with a cold light rain. Thin plastic ponchos helped make the 3.5-hour tour a success as we biked from site to site with narration from Sam, our guide, along the way. We rested up at the hotel for the night tour as the afternoon sun broke through pastel Parisian clouds. The love affair between the sun and clouds ended just in time for our evening bike ride. We rode through rain. We rode through sheets of rain. We rode through sheets and buckets and torrents of rain. We did not stop. We did not shop. We skipped the promised ice cream and no one complained. We did, however, have some reprieve during the “boat ride on the Seine” portion of the tour. Four hours later, the tour ended. In a weird way, although our shoes “squished” with every step and our drenched clothes were glued to us, we enjoyed the adventure and the other tourists we met.

Paris has more than its share of museums and monuments. Small, large, mainstream and bizarre, you name it… Paris has it. Here are a few observations:

1. Large museums, like the Louvre or d’Orsay, have lots and lots of things in them and many of these things are outstanding. The problem is, if you don’t hold a Doctorate in Museums—and that’s 99.9999% of all adult visitors and 150.3% of all child visitors—the plethora of outstanding things is simply overwhelming. Another Renoir? Yawn… We actually found smaller museums, like the Conciergerie—where the guillotine was trés busy during the revolution—to be more informative and much more relaxing. Plus, smaller museums take less time, making it easy to break the day up with a variety of adventures.

2. And because most of us do not hold Doctorates in Museums, we don’t know what to look at. So we are trained to be attracted to certain objects like les mouches (flies) sur merde. One such object is the Mona Lisa. I can’t be sure, but I’m pretty certain it’s NOT the best painting of the 300,000 (really) in the museum. I’m also pretty sure the Venus de Milo is not the best sculpture. Mon Dieu, she doesn’t even have arms!

4. Security policies are variable. At the d’Orsay, you have to check your rucksack but can take your camera in. However, the camera police are at the ready to wag a finger and say, “Non!” should you try to take a photo. On the other hand, many people get their rucksacks through and hundreds are sneaking photos. I tried to snap one shot and received a good wagging. At the Louvre? Rucksacks are fine! Photos? Take as many as you want! But try to eat ONE PIECE OF CHOCOLATE and watch out! I did… and failed. I wanted to give that Monet a chocolate moustache SO BAD! So, when in Paris, be prepared to be flexible to accommodate a seemingly incomprehensible security net.

5. Monuments are not created equal. The Arc de Triomphe certainly makes a point. And then there’s Napoleon’s Tomb.  It’s enormous! Some might say it’s gigantesque! Like Paris, it’s really, really big. I can’t be sure, but I think someone, even in death, was compensating for a certain shortcoming in life.

And then there’s Versailles…

The French try to put a good face on the three Louis’ (14th, 15th and 16th), but the enormity of their opulence and power is a wee bit on display at the Palace. Look at it this way, Versailles was an escape for royalty from an increasingly hostile Paris. But for Louis XIV, Versailles and its 10,000 inhabitants (royalty and servants) became too much. To alleviate his suffering, he commissioned the Grand Trianon, another palace at the opposite end of the Versailles grounds, to be built. With the Versailles grounds being 2,000 acres, or about half the size of my home town, Moscow, Idaho, the Trianon was a good place to be… unless you were Louis XVI… for whom there was ultimately no good place to be.  Well, if Louis XIV found the Palace crowded then, he should try it now! Canned sardines have it better. The Trianon was much more relaxing; there was virtually no one else there.

And now… a few notes on Paris…

1. The weather in Paris in May can be quite nice. At least it was the week before we arrived. Other than the first day and our Versailles day, our stay has been cool, cloudy and with varying amounts of rain. This is not necessarily a bad thing. We can only imagine moving about the crowded city on a hot, muggy July day. Nope, that’s not a warm steamy crêpe you’re smelling! So, we’ve rejoiced in the cool weather… mostly.

2. Getting around Paris is super easy via the Metro. It’s quick to learn to use and is inexpensive and efficient. We had just one really screwy morning, and that was because a Metro line was unexpectedly shut down. Again, we’re glad we weren’t using it in July. Nope, that’s not fresh camembert you’re smelling!

3. People are forever losing their gold rings along the sidewalks! In fact, one day early on during our visit, a woman picked up a gold band right in front of us! She gave it to me saying she doesn’t wear jewelry. What good Parisian luck I have! As I walked away, she asked if I could give her a Euro or two for coffee. As I reached into my pocket, a woman behind me—whom Natalie could see—waved her hands in effect saying, “No!”  I handed back the ring and thus escaped the scam just in time. We were approached by two more women within 10 minutes… and a few days later by a man… doing the “ring drop.”

5. Paris is the second most expensive city in the world. We agree. We sat down at Les Deux Magots, a very touristy café, just yesterday but left before ordering two beers… two beers for $28.00. But if you look around you’ll find ways to have fun and live well. Besides, people are throwing gold rings all over the place! 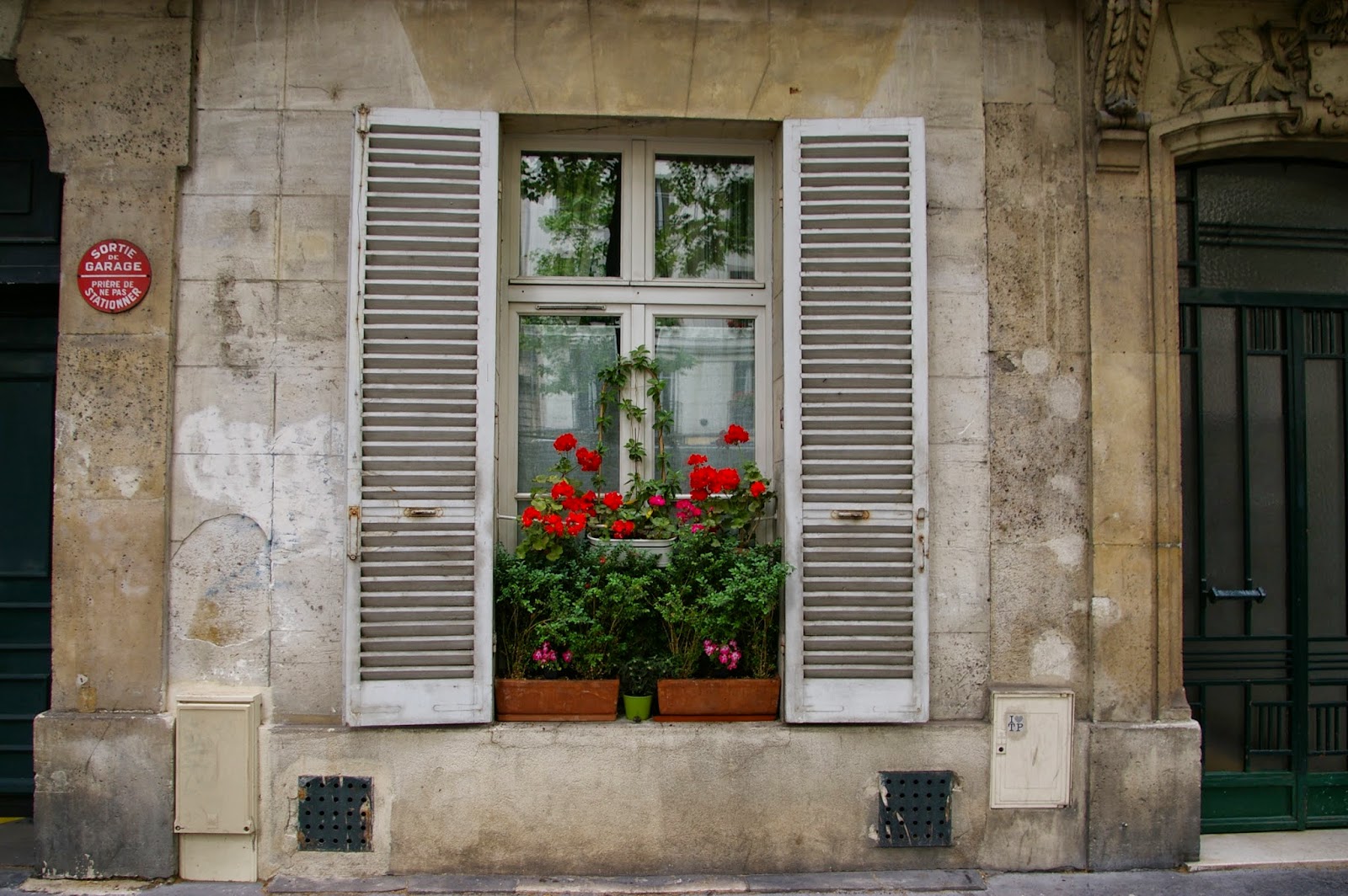 From Paris… À Trés Bientôt!
- May 28, 2014
Email ThisBlogThis!Share to TwitterShare to FacebookShare to Pinterest