Coming Face to Face with an Italian Bidet


Leave your lederhosen and/or dirndl in the closet for this update because we're going to go Italiano for un momento! 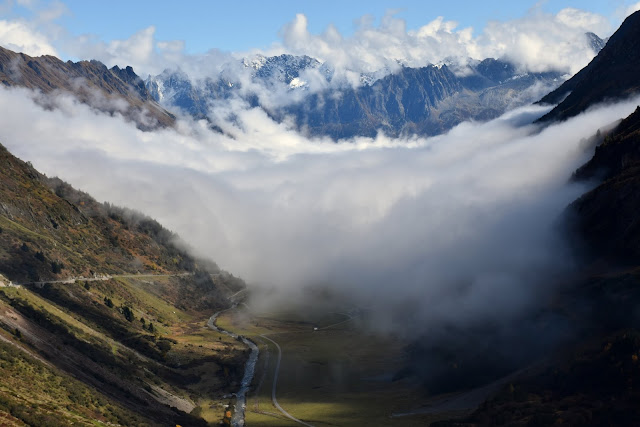 Careening around steep curves on Italy's the Fucca Pass kept Natalie awake! But stopping for alpine snapshots on our way to Milan was a rare event. It was just as well. Caro, our former exchange student from Ecuador, now studying in Milan, was expecting us mid-afternoon. 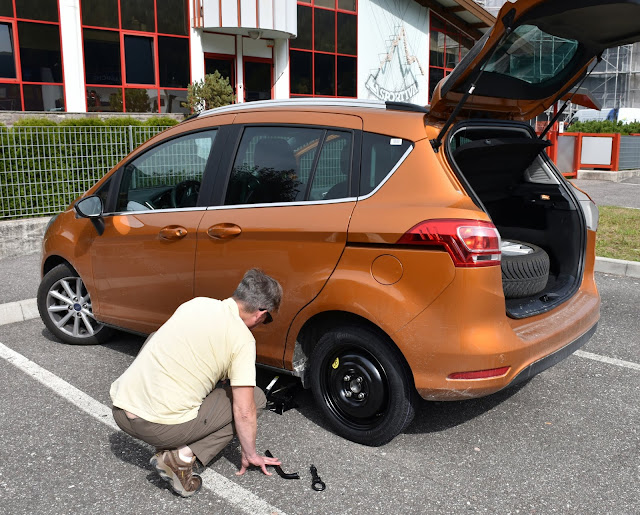 Deep in the Val de Fiemme, Natalie noticed a “click, click, click” sound, like a rock in a hub cap. A few miles later, the left rear tire went flat in seconds. The first parking lot we could find in the village of Ziano de Fiemme turned out to be the world headquarters of the La Sportiva company – makers of shoes for all types of outdoor pursuits, including the best rock climbing shoes available. The kind people at La Sportiva told Natalie that the nearest repair shop was two miles back in Predazzo. It was already 12:30 p.m.

After lunch (because everything was closed for lunch) the guys at PilaPneus Di Giacomelli Sandro & C. Snc. took care of us presto! At 2:30, and $240 poorer, we had two new rear tires (Italian law - rear tires have to match) and were again speeding toward Milan... hours behind schedule. 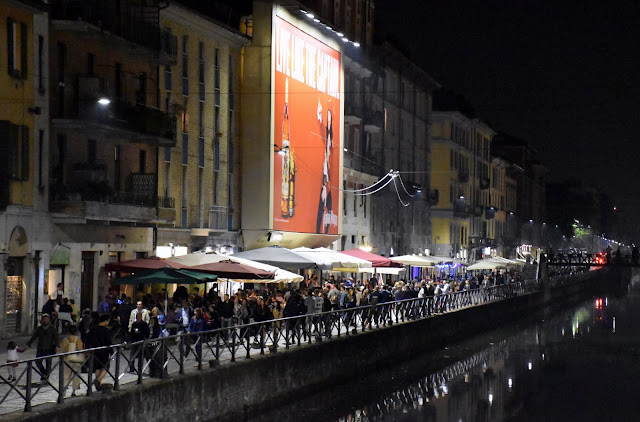 Getting past the ubiquitous graffiti, trash, and cigarette smoke that characterizes Milan and many other European cities can be difficult. But within an hour of beginning our Friday evening walkabout with Caro, the vibrancy of the city came into full light. The city’s central district hummed with thousands of people out for the evening to have dinner, drinks, ice cream, or just stroll along the canals and boulevards. We were off to a good start after a deflating day.

Below, Caro and us on our Friday night walkabout! 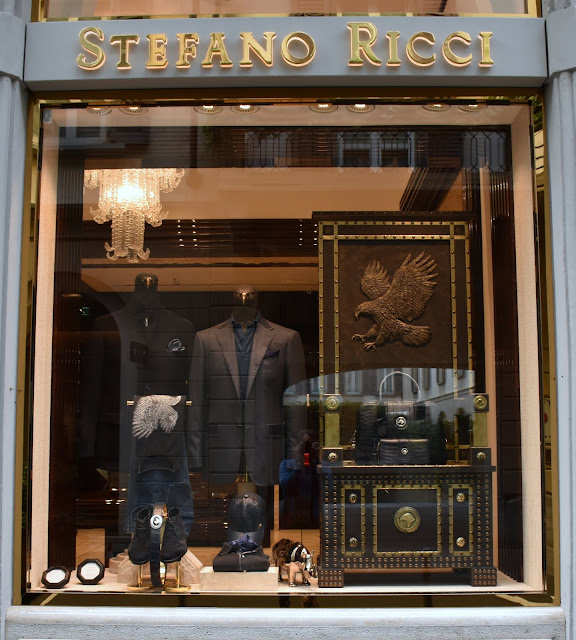 We saw a ton in 10 hours walking Milan with tour guide Caro. We went to the Duomo, the Galleria Vittorio Emanuele, and past the Sforza Castle and the Leonardo da Vinci monument at Piazza della Scala.

We also strolled along narrow streets lined with carefully crafted display windows of top clothing designers. People like us look in these windows. People with stacks of cash go inside the stores. Inside, there are extremely bored hosts and guards in dark suits with earpieces. Some stores allow commoners to enter, while others have a doorbell to request entrance. These are by far the best streets in the world to play doorbell ditch! 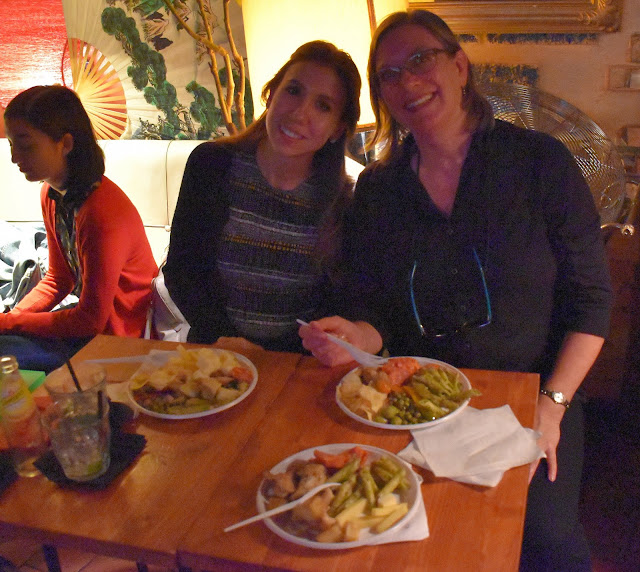 To help us wash away our shame of being so poor, Caro took us back to the Navigli Canal district for dinner, Milano Apertivo style! Now this is something to take note of!

It works like this:
Here's a funny note: Our waitress tried to charge us €9.00 per person. Caro pushed back – in Italian rather than English – the rate was quickly reduced.

Our first impression of Milan had been transformed. No, we wouldn’t live there, but we would go back for another round of Italians enjoying weekend life.

With that, it was time to sleep. We were exhausted. 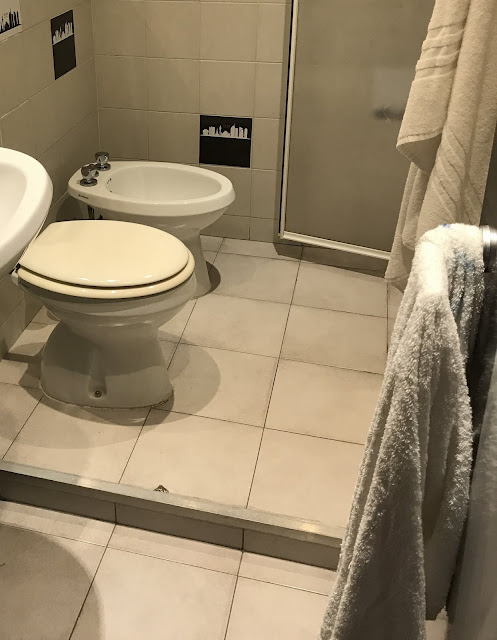 At 5:00 a.m. nature called; I didn’t turn the bathroom light on. That decision, it turns out, was a big mistake. Do you see that small step up? I didn't. In the dim ambient light, my outstretched arm reached for the wall, but it kept receding as I fell forward. And CRACK!, my face hit the bidet. A BIDET!... A BIDET!

In more shock than pain, I moaned (Natalie says I swore… so I’m going with “flibberty-mothra-flooker!”) and turned on the light. I spit blood and tiny pieces of tooth into the sink. 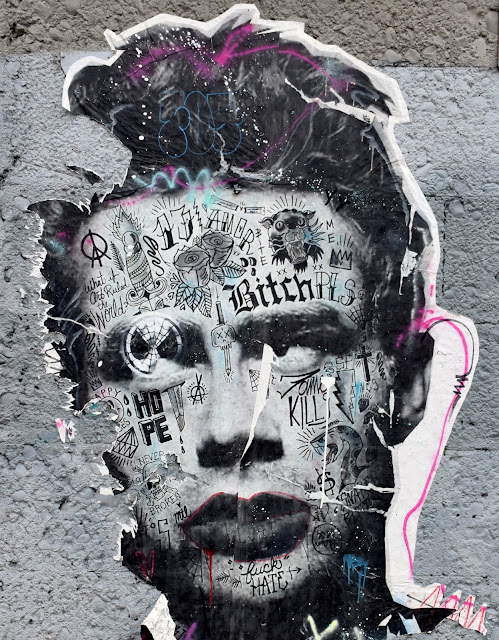 You know how your jaw and mouth feel when they wake up from novocain’s numbing effects? As dramatized by Milan street art, above, that’s how my face felt all day Sunday during our drive from Milan to Switzerland. My retainer was firmly in place to stabilize traumatized upper front teeth. Yes, there will be a trip to the dentist upon my return.

Entering the Berner Oberland of Switzerland – the heart of the Swiss Alps – will brighten anyone’s smile, even if it was hit in face by an Italian bidet the night before. The Lauterbrunnen Valley is kind of like Yosemite Valley, only prettier, with green pastures hosting cows, sheep, and goats, and glaciers hanging above soaring cliffs, along with quaint tourist villages connected by trams, trains, bike and walking paths, and narrow roads. Oh, it’s expensive, but I was in a much happier place. 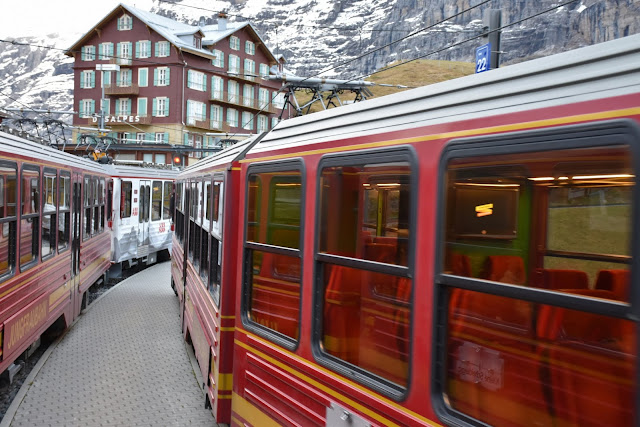 For a mere $135 per person, we rode cog railway from Lauterbrunnen, through the Eiger, and to the 11,371 ft. high Jungfraujoch – The Top of Europe! as the Swiss have named it. The Jungfraujoch is another massive structure built inside and on top of a mountain. The weather never did cooperate – we never saw Europe’s longest glacier – but we did see man made attractions courtesy of Swiss Tourism, like the Ice Palace carved inside the glacier and the Alpine Sensation – a multimedia creation showing what we would have seen outside. The Swiss even went to the trouble to provide shopping opportunities for Lindt Swiss Chocolate, Victorinox Swiss Army Knives, and, of course, Swiss watches.

Now here’s an odd thing: Everyone in China is currently visiting Switzerland. We first noticed this in Bavaria and now here in the heart of the Swiss Alps. It was an odd culture shock! 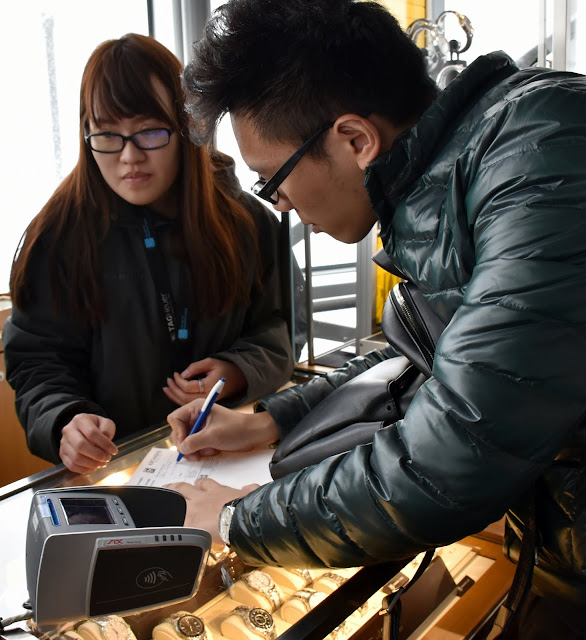 Swiss watch sales do take place at the Jungfraujoch! I'm pretty sure the woman behind the counter was not Swiss; she sure didn't sound Swiss. A cheap watch sells for $500. The somewhat nicer watch I promised to buy Natalie is $35,000.

Can you guess which one of the three options was the best seller at the Jungfraujoch cafe? By far the most popular item was the €8.00 Chinese-labeled cup-o-noodles (Yes! It comes with hot water AND chopsticks!). The entire room smelled, in a good way, like cup-o-noodles! We almost bought some, but I'm saving for that Swiss watch.

Though we were in culture shock, the Swiss Tourism Bureau is not. They clearly know their current market. 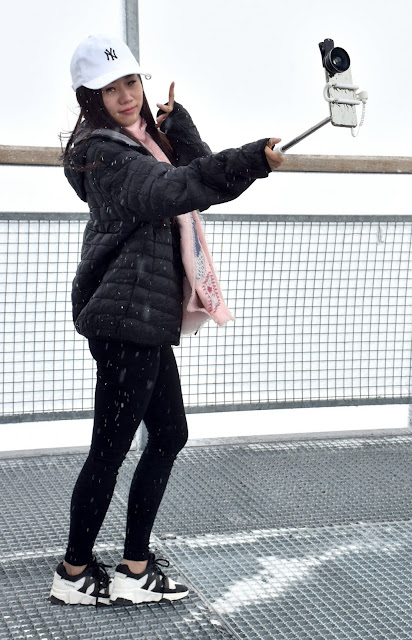 Like many Americans, the Chinese may be reserved as individuals but are loud and pretty crazed in groups! Oh, and they LOVE taking selfies with selfie sticks... even when there's absolutely NO scenery! 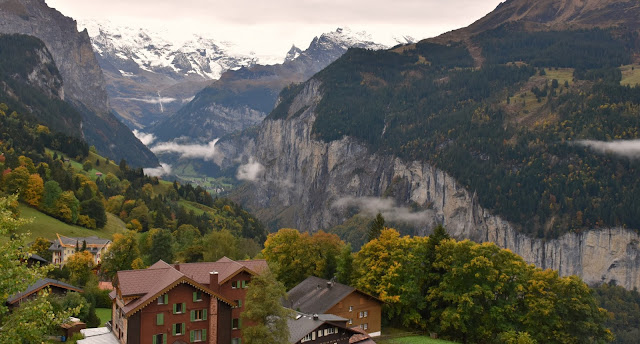 Up next? The sun comes out at the clifftop village of Murren... yes, on top of THAT cliff... and we go hiking, biking, along with some vertigo-inducing via ferrata!

At this point it's probably clear that we love travel and everything that comes along with it. There’s rarely a place we say we won’t come back to – even cities like Milan. Actually, I’m totally committed to my return to Milan because I have a hot date! Just me, a hammer, and a certain Italian bidet in room 302 of the New Generation Hostel Urban Navigli. I’m not going to turn the light on… I’m going to surprise my Italian bidet… CRACK!

Until next time... Ciao! 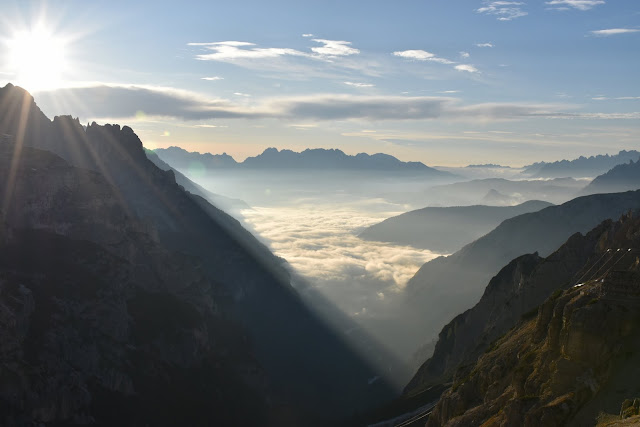 Sunrise in the Alps...

- October 05, 2017
Email ThisBlogThis!Share to TwitterShare to FacebookShare to Pinterest