A week ago Ned emailed and said, "Todd, do you have your stretchy pants and tour shoes on?" I answered, "Mais oui, monsieur Evett!"

For background: Ned had just returned from six weeks as the opening act (support) for Joe Satriani in Europe and needed drumming services for the North American portion of the tour.. three weeks in December and two additional weeks in January. I confess, hitting the big stage in front of large crowds is really something - even for the support. I had my first taste of this with the band DRAW, touring with Built To Spill in 2003 and then with Ned opening for Joe six nights in Europe in 2008.

After some scrambling to put work projects in order, buy and set-up a laptop and make a few needed drum purchases, my bags were packed and ready to roll.

We met at our departure site in Boise's North End Saturday afteroon, November 27, and packed the 15-passenger van with gear, luggage, CDs and DVDs. The crew for the first leg of the journey is Ned Evett (guitar extraordinaire and leader), Dave Barlow (freshman guitar and drum technician) and Burt Bergeron (Canadian-based van owner and tour driver). After four hours of driving in snow, Burt decided the best course of action was to stop at Utah's Crystal Hot Springs. This wouldn't have been my first choice with such a long drive ahead of us but after more than an hour soaking in the pools as snow fell, I concluded Burt was right.

Thus, the first thing to learn, or quickly remember, is to go with the flow of the tour. The start can hit like a slap in the face; in an instant the comforts and routines of home are wiped away and a new system of living begins. Eventually, there's a "tour pace," but that doesn't set in until the initial travel stage is complete.

With the hot spring's rejuvinating effects in place, we continued our massive drive in the dark of night, eventually rolling through Denver's deserted Sunday-morning-downtown and coming to rest via a daytime stay at Limon, Colorado's, K&S Motel. We picked the drive up again Sunday evening. 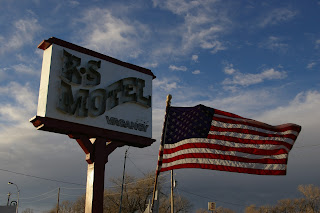 The K&S Motel  and the Flag - Limon, Colorado
One thing I noticed right away is how utterly boring and homogenious the Interstate Highway system is. The ammenities - franchise fastfood restaurants and motels, fuel stations, etc. - are virtually identical all along the way. It's corporate efficiency at it's best, but it lacks in almost every other way. On the otherhand, we did enjoy the fact that we could always find a Subway Sandwich shop. It's not gourmet, but it beats virtually all other Interstate food options.

After 1,900 miles of driving and many DVD's later the first, and likely the most grueling, portion of the tour ended as we made our way into Nashville less than 48 hours after leaving the wintery weather in Boise. Tomorrow we pick up more gear and our bass player - Malcolm Bruce - and then head to Atlanta to join Joe and his crew for Wednesday's opening show. 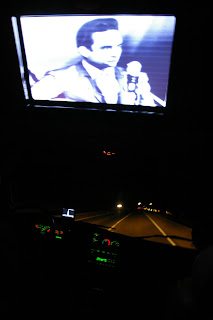 Somewhere in Kansas with Johhny Cash to Keep Us Company
OH - If you're interested, you can see all of the shows we'll be playing at www.satriani.com/road/. The only shows we don't play are the first four nights of the January tour leg (western Cananda) and the two nights at the very end in Mexico.
- November 29, 2010
Email ThisBlogThis!Share to TwitterShare to FacebookShare to Pinterest