A rainy Tuesday in Nashville finds us at Soundcheck - a major touring equipment warehouse that supplies staging and sound gear of all types for major touring acts.  Our mission was to pick-up guitar amps for Ned courtesy of the Peavy company. One would never know it, but last spring's flood inundated the facility was during the Nashville flood and was re-opened just two months ago. Top name performers store their instrument collections at Soundcheck.... or once did.

Mission accomplished, we drive to the outskirts of Nashville where we meet Malcolm for our one and only practice session. A quick Mexican dinner and we start the drive to Atlanta. After the long haul, a four-hour drive is seemingly small. We arrive at Jeff Duke's house at 2:30 a.m. Jeff's been kind enough to host us for the night... and even kinder to wait up for us.

Wednesday afternoon and we're at the venue in downtown Atlanta. A typically nice hall complete with catering (lunch and dinner) and a large green room outfitted for us with fresh fruit, nuts, bottled water and a bottle of wine! 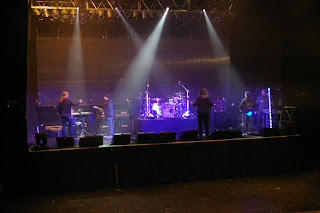 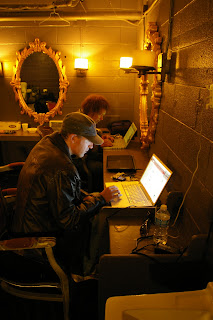 Malcolm and Ned "Wired" Backstage After the Set﻿
AND FINALLY, after a very short sound check and small dinner chatting with Joe and Malcolm, we hit the stage for our set. No dropped sticks, no major errors! Man-o-man it's nice to play on the Big Stage in front of people who are there to listen to the music. As I write, Joe's on stage ripping it up... show-off :)

The van's packed and we're set to drive south overnight to Florida for the first of three nights before heading to the cold north. Ah! Another night in the van watching DVDs...

OH! And if you're interested, Joe was on the Tonight Show Monday night - see http://www.youtube.com/watch%3Fv%3D1IQnPy5bzFY