Its vibrant atmosphere buzzes with bees, birds, and butterflies. And bears, bison, and bobcats frolic in flower-speckled meadows while geysers burst with majestic plumes of water and steam. The world is so beautiful.

Well, that’s how I imagine Yellowstone in spring, but we visited the park in late February with a promise to our Swedish exchange student—Isabell Persson—that winter is the perfect time to experience the park’s wonders.

But first, let’s back up a bit. Natalie and I are lifelong residents of Idaho and have lived within six hours of Yellowstone for the past 29 years. Nevertheless, we hadn’t stepped foot in the park in… quite a while. For Natalie, it was 1969 and Neil Armstrong had become the first person to take a stroll on the moon. My last visit was the summer of 1974, the very same summer Nixon resigned. As a reminder, Richard Milhouse Nixon was the 37th president of the United States and had “issues” that forced an early exit. Today, we’re on our 45th president. I wonder how it will turn out for him...

In winter, unless you’re John “Grizzly” Adams, Liver-Eating Johnson, or some other crazy, smelly mountain man, access to the park is restricted to snowmobiles modified to produce less sound, or snowcoaches. Being non-smelly and mostly ordinary people, we contacted the fine folks at Yellowstone Tour and Travel to purchase a 3-night snowcoach package at Three Bear Lodge.

Along with a one-day Old Faithful snowcoach loop tour, our package also included a prime rib dinner, three breakfasts, a special gift from the lodge’s store (YO! Get your Three Bear Lodge hat or water bottle!), AND tickets to the IMAX theater! I did the math. The package really was a better value when compared to booking items à la carte.

So there you have it!... All of the background information needed to go along on this TourAlong. 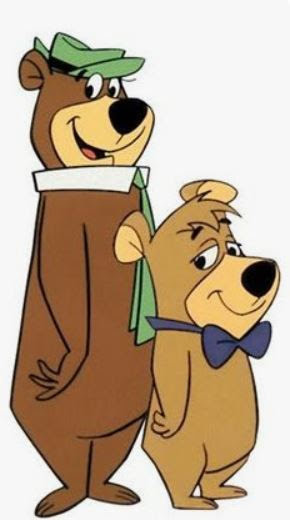 Yogi Bear and Boo Boo are here to guide us!

Our drive to the town of West Yellowstone was spectacular! Sunshine, blue sky, cloud-shrouded mountains, snow-dusted meadows, and lunar-like lava landscapes. This was a photo opportunity day! It turns out the girls had a secret bet: How many times would I stop the car to take photos? Natalie said 12 times; Isabell said 14. And the answer is?....  13 stops. They declared the outcome a tie. And I now know I have yet to reach the acceptable maximum number of photo stops. Game on!

The final 30 miles to West Yellowstone was different. As dusk turned to night, snow began to fall... we had entered the "winter zone." 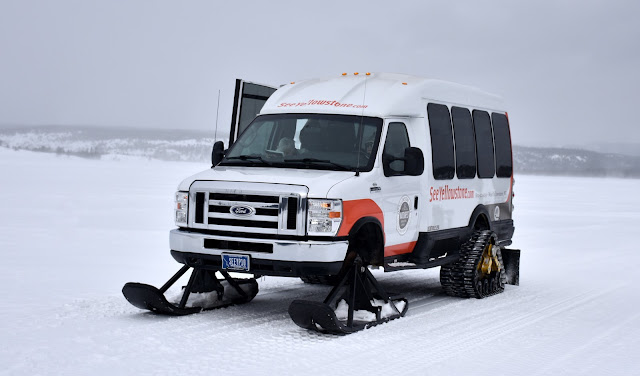 Saturday morning was time for a snowcoach tour! The snow fell as the wind blew, but modern snowcoaches know no limits. Crammed in the cab with 14 of our favorite strangers, we were off to see the sites of the world’s first national park! 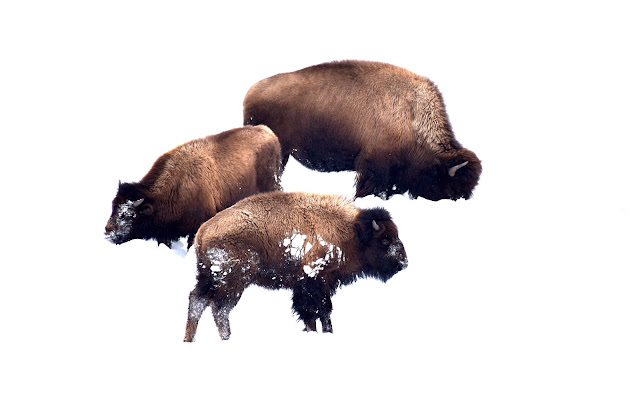 The first animals you're bound to see in Yellowstone are bison. They roam everywhere and pay little attention to snowcoaches. However, one cross-country skier we happened by was out of breath, wide-eyed, and in a bit of a panic after being chased by one of these large creatures. 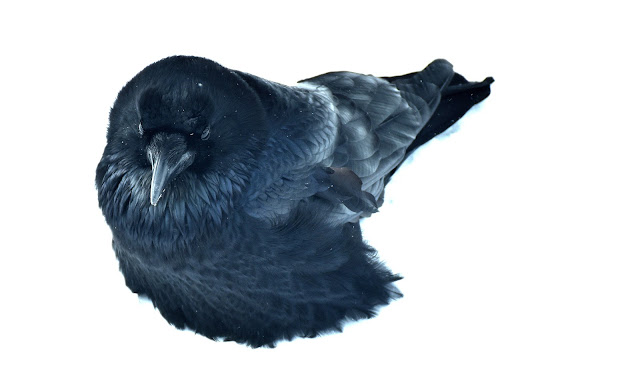 Wrapped in its feathery cloak for warmth, but lacking enthusiasm to fly in a fridgid day's wind, this raven found it better to stay on the snow. As our tour day wore on, we met the idea of leaving the snowcoach with waning enthusiasm too. 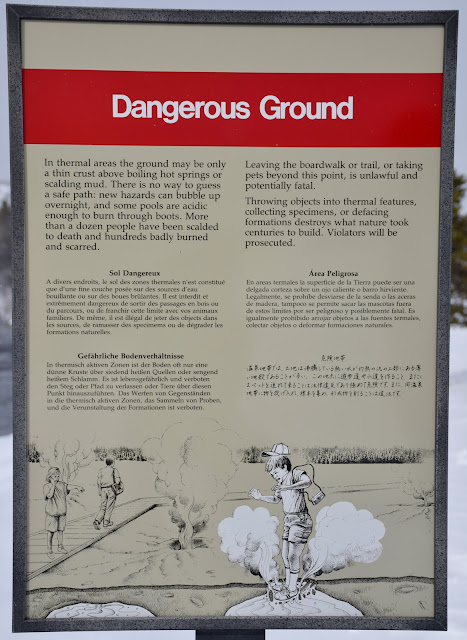 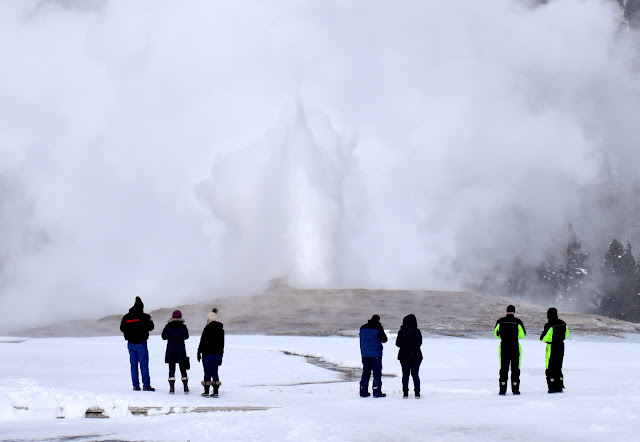 Old Faithful is seen by millions of visitors each year, but if crowds aren't your thing, winter is by far the best time to stroll along the boardwalk surrounding the geyser's cone. Our tour took us to Old Faithful for two eruptions, and during that time, Natalie and I were a wee bit distracted calling and texting our real estate agent. You see, we were neck deep in buying a new home and selling ours, and while snowcoaching around, we received four offers on our home and had long distance decisions to make! 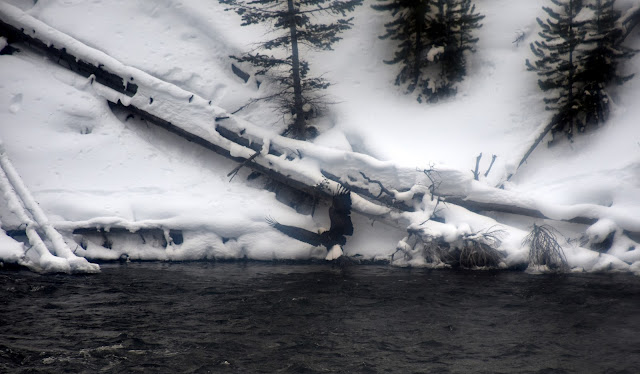 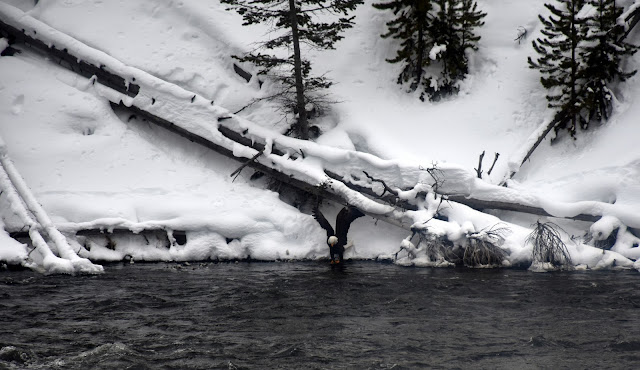 An eagle swooped in on a fish dinner and our driver stopped the snowcoach for a photo opp to record it. 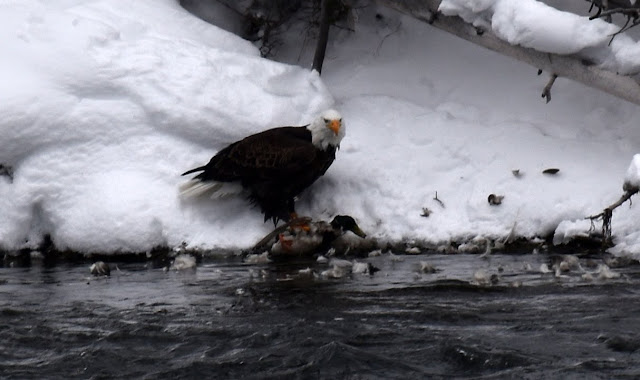 It wasn't until we were back at the hotel, and I could zoom in on the images, that we learned the eagle had clobbered a sitting duck! At 17 years old, Isabell's eyesight was better than everyone else's on the snowcoach; she knew she saw feathers flying! Isabell and the eagle were both very pleased with themselves. The duck, however, had had better days. 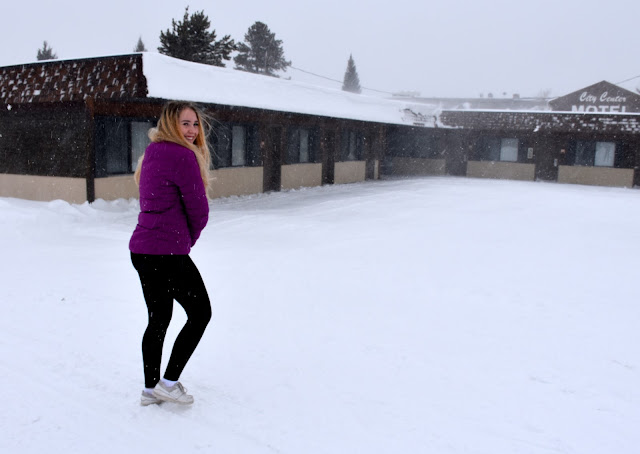 Isabell's ready for our Sunday tour of downtown West Yellowstone. We had gift shopping to do, an IMAX movie to see, food to eat, and beer to drink. And we did just that! Well... no beer for Isabell... wah, wah, wah, waaaah. 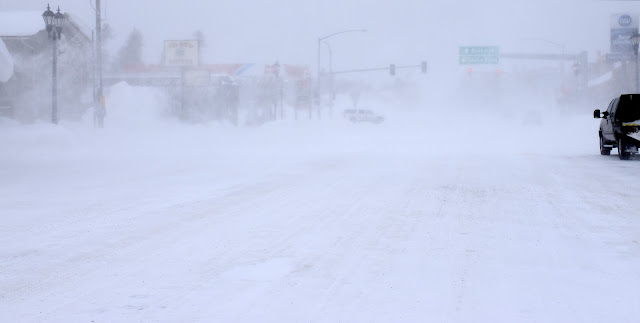 Monday was supposed to be our road day home, but the blizzard was in full bloom and the roads were closed. It was a vacation snow day! What to do? There's the restaurant again, and more fascinating shopping... and don't forget zombie-like wandering around in the storm. 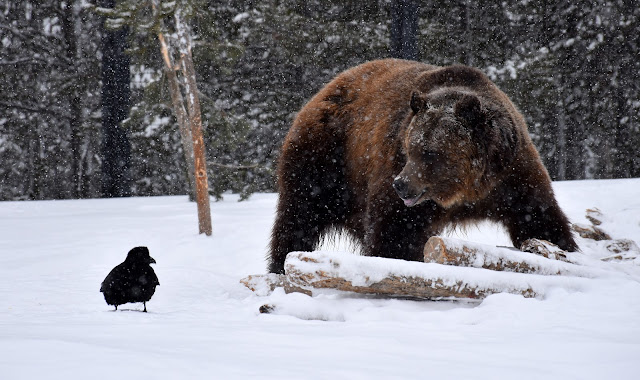 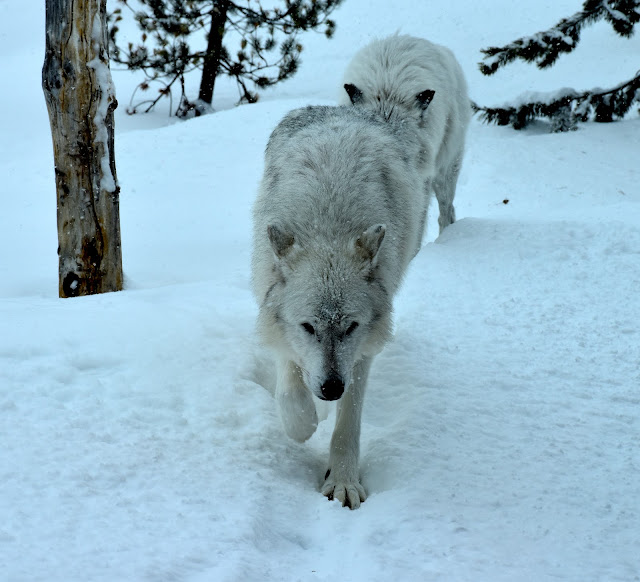 At the Grizzly and Wolf Discovery Center, you can see lions, tigers, and bears. The center's staff gave all the fun animals cute names, but they won't let you ride them. Come on! These are cuddly bears and big puppy dogs! What a bunch of Debbie Downers! 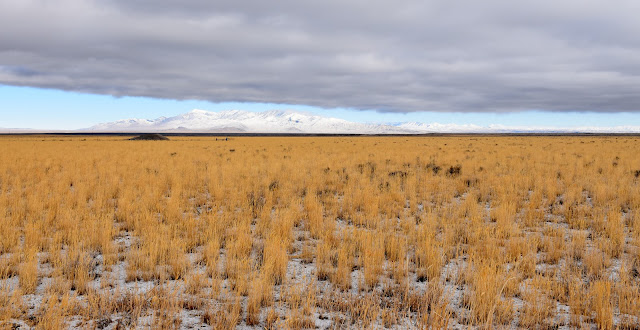 After three days of storm and snow, and a bonus day wandering around the hotel and town, the roads opened. Thirty miles into our drive home, the pavement was dry and the skies began to clear.


So THAT'S how an unexpectedly extended winter weekend in Jellystone Park goes! Isabell saw a bit of Yellowstone and a bunch of snow, and she checked an item off her bucket list; we all saw lions, tigers, and bears; and Natalie and I sold our house!

When will we visit Yellowstone next? Who knows? Probably when a human walks on the moon and a president is forced from office... I'd give it a year or two.

But wait! A photo album you ask?

Why yes, of course!

You can view the complete set of images that tell the story at Jellystone in Winter.

Click the first image, and then use the right-arrow key on your keyboard to advance the slide show.

Thanks for coming along! 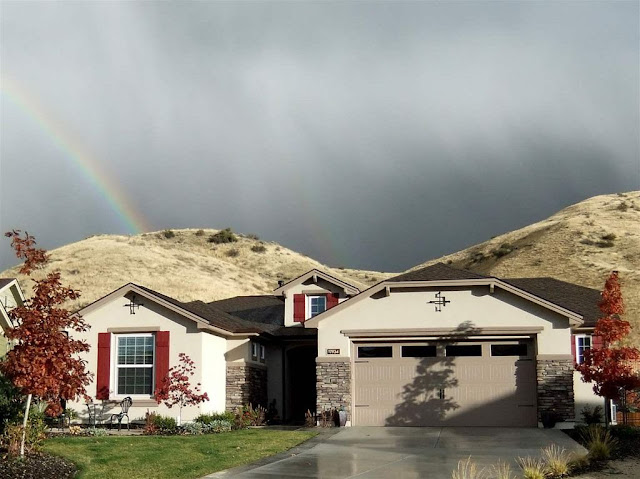 Located eight miles north of Boise along Highway 55, our new home faces a small park at the south end of the Avimor community. At a recent block party BBQ, we learned our neighborhood is known locally as... South Park!

The rainbow is a permanent fixture in the sky and is paid for by our homeowners' association fees. Sadly, the double rainbow option was too expensive. ~ TC

- April 28, 2018
Email ThisBlogThis!Share to TwitterShare to FacebookShare to Pinterest