Presidential Pandemic Pandemonium? Or...? How About an Epic Olympic Retreat!

I present you two distinct choices!

How you vote to spend the next ten minutes of your life will decide the fate of your day, your week, your month, your year, your life, our country, our democracy ... nay ... life on Planet Earth! As we know it!

In FACT! Your vote will literally decide the future of HYPERBOLE!

Vote once my friend, and vote wisely.

I, <insert your name here>, being of sound mind and body, hereby choose to spend the next ten minutes of my life:

A. Fretting about the Tumultuous Train of Presidential Pandemic Pandemonium barreling into the station that is our nation, at full speed and with no brakes!

B. Curling-up into the deep, warm trance of a voyage on the TourAlong Train, rolling along ... with soothing rhythm ... on tracks kissed by the morning dew.

Sane people, like you, correctly voted for choice B! And to celebrate your success, pour yourself a big ol' cup of your favorite pandemic beverage, take a satisfying sip, relax, and close your eyes. Your TourAlong choo-choo train has arrived ...

In this edition, we conquer an Oregon volcano, relax lakeside in Montana, and explore Washington's Olympic National Park!

Best of all, it's presented in the ever popular picture-n-caption format for easy reading!

All aboard! Woo! WOOOOOOO! 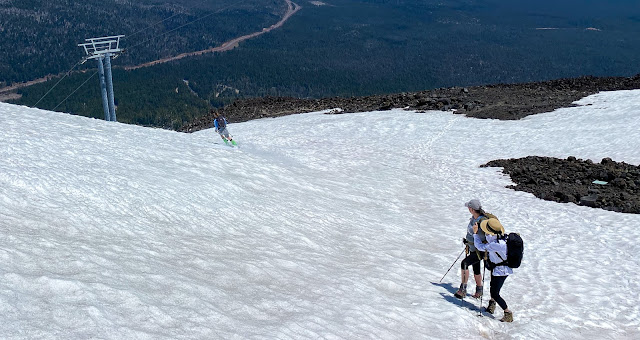 Just when we began to feel comfortable gloating about our skilled alpinism and superior ability to acclimatize to the rarefied air, some guy (let's call him Jean-Claude) swooshed by.

You see, SOME PEOPLE have to show off. Jean-Claude scaled Bachelor hauling his skis and boots with him, and THEN took the easy way down. What a wimp.

Just as wimpy were the people who JOGGED to the summit for "fun." Get a life, LOSERS! 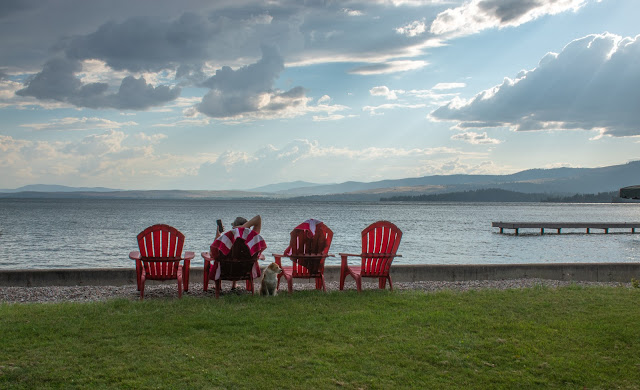 Looks can be deceiving. Pictured here, Natalie's impressive multitasking talent is on display at Montana's Flathead Lake. How many simultaneous actions is she engaged in? Can you tell?
Two? Three? More?
How about TEN!
Let's go over the list, shall we?
1. Holding her phone
2. Holding the beach towel in place
3. Keeping the water in the lake
4. Maintaining the sun's safe distance from the Earth
5. Creating clouds
6. Directing the movement of the clouds
7. Overseeing the growth of each individual blade of grass
8. Stopping the chairs from changing color
9. Keeping Lilly, the Wonder Dog, on a sit
10. Sipping wine
I challenge anyone to top that!
Lilly, on the other hand, chooses not to multitask. There's no question that she CAN multitask, but she prefers to concentrate on one thing at a time. As clearly seen in the photo, Lilly is looking left. At that precise moment there was no dog, anywhere, looking to the left with more intensity than Lilly.
Good dog!
__________________________________________________

It's time to head to the dining car to refresh your pandemic beverage and grab a nutritious snack (I suggest Cheetos, the Dangerously Cheesy snack) and then find the seat reserved exclusively for you in the TourAlong Train's first-class cabin!
Hold on to your hats because the main event is about to begin: The TourAlong Train's EPIC OLYMPIC ADVENTURE!
What? A vacation in the middle of Terrifically Terrifying Presidential Pandemic Pandemonium?
Yes! And you know a vacation is EXACTLY what you need!
So settle into your reclining chair, soak in the view from the panoramic window and relax ... your experienced engineer is dedicated to keeping this train on track.
__________________________________________________ 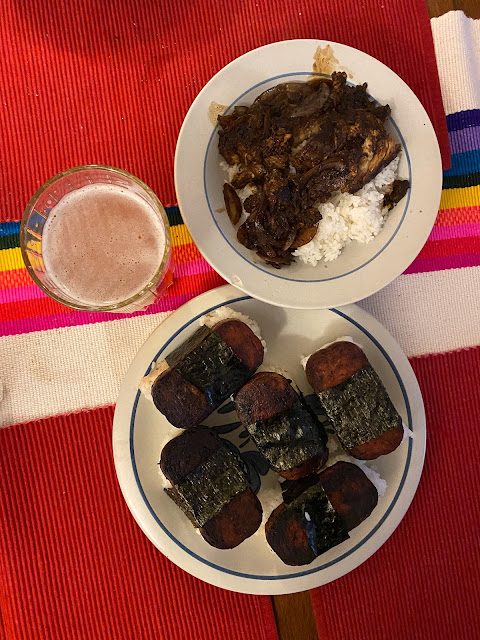 This adventure's Welcome Dinner featured Katsudon and SPAM Musubi. Katsudon? I don't care what that is because SPAM Musubi features SPAM!* Made of a bed of sticky rice, a thin but potent layer of wasabi, and SPAM—all wrapped in that odd seaweed stuff—SPAM Musubi is to die for! GO SPAM!

And KUDOS to Chef Simon!

Every good adventure begins by leaving a port. On this trip, it's the port of Seattle! Home of a software company we love to hate, a turbo-charged caffeinated coffee shop, an unbelievably massive consumer products shipping company, and quite possibly the best band around ... Death Cab for Cutie!
Au revoir Seattle! It's time for the Olympic Peninsula and Olympic National Park!*
Olympic National Park was established a national monument in 1909, and then became a national park in 1938, featuring three distinct ecosystems: glaciated mountains, temperate forests, and Pacific coastline. Visiting the peninsula means rolling dice with the weather gods. You see, it rains in the Olympics, a lot! How much? How about 150 rainy days annually, dropping a total of 56 inches of precipitation (up to 400 inches of snow in the mountains).
As luck would have it, we arrived during a period of perfect fall weather.

*A special thank you to Natalie's dad and mom, Elwyn and Dixie Johnson, for inspiring this Olympic National Park TourAlong. 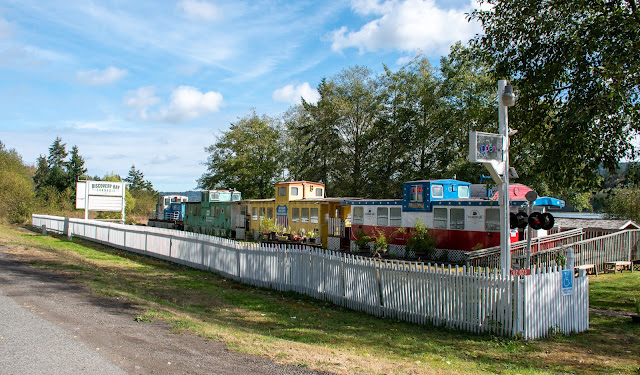 The four cabooses that make up this train may be stationary today, but they represent a long history of the Olympic Line extending from Discovery Bay to Port Angeles, transporting timber from the Pacific Northwest's forests to Seattle. These cars have had a varied life since the line's retirement ... and their current life? Welcome to Discovery Bay Cannibis! I'm pretty sure patrons of this "Canniboose" go on a wide variety of highly adventurous and colorful trips daily!

Hurricane Ridge! Our first official stop on this TourAlong! At the height of the season, throngs of visitors gaze at distant Mt. Olympus, assuming it can been seen at all, depending on the moods of the weather gods. And from what does Hurricane Ridge derive its name? Silly me! It's the gale force winds and otherwise crappy weather that frequents the area all year long.*
Pictured above, Natalie and Simon hike the completely paved Hurricane Hill Trail. Don't let the pavement fool you though because this trail has some seriously steep sections.
*Except in this case, in which there was not a FREAKING SINGLE CLOUD IN THE SKY making taking interesting photographs a difficult proposition! 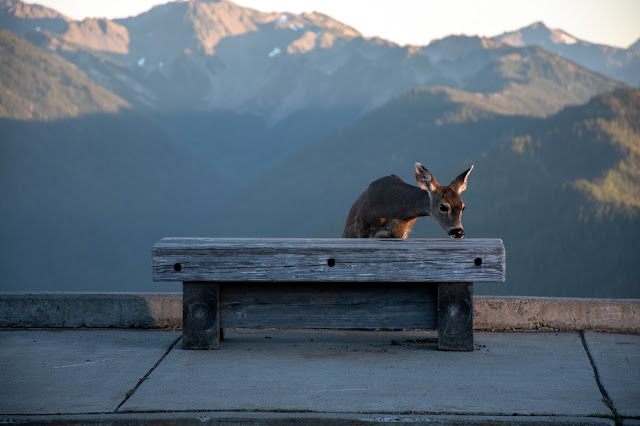 Like my mom always said, "Stay away from benches at Hurricane Ridge. You never know who's been licking them!"
The logging town of Forks may not be scenic, but its location is ideal for exploring the park's Rialto Beach and Hoh Rainforest. More importantly, the Twilight film series—cherished by teenage girls and abhorred by teenage boys—theoretically takes place in Forks. The fact that none of the five movies were filmed in Forks hasn't stopped the town from cashing in on the phenomenon. Looking for something to do September 9-12, 2021? Get yourself on over to the Forever Twilight in Forks Festival! And when you're planning your trip, make Woodland Inns your home away from home! As you can see, Simon and Natalie felt quite at ease on the porch of our cabin. Woodland Inns are brand new, extremely well appointed, and their attention to cleanliness appeals to the Todd in everyone! 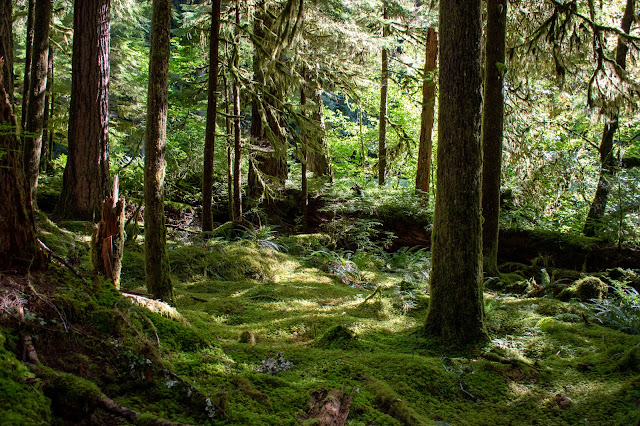 Here's an uncommon sight on the Olympic Peninsula: A sunny day in the rainforest! This spot was a total surprise during a spur-of-the-moment drive up the Sol Duc River. But the best thing about this stop were the cascades ... 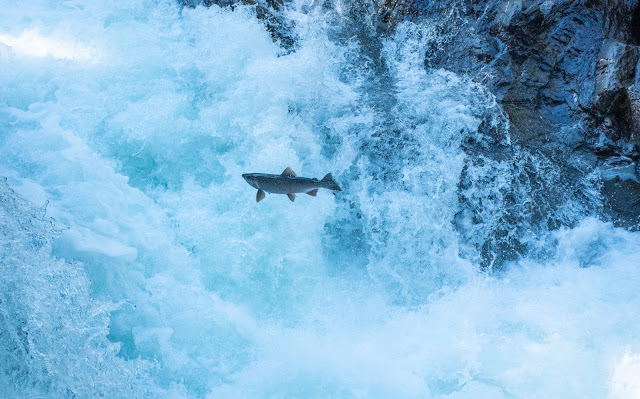 Salmon are pretty amazing fish. They can fly AND they taste great! My preference? That they filet and BBQ themselves as they fly ... into my mouth! We witnessed them engaging in their final journey as they flew upstream into incredibly tall and fast-moving cascades at the Sol Duc River Salmon Cascades. Flying into my mouth is SO much easier. 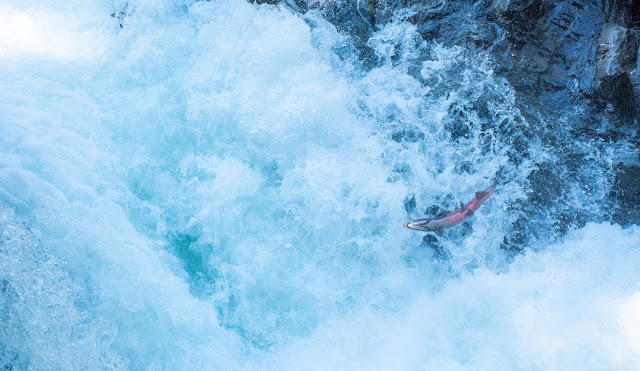 Some salmon like to show off, like this one, "Pinky," performing a Side Flappity Flop Double-Fly Flip Fling, first executed by Charlie the Tuna at the 1976 Oceana Olympics. Pinky received a score of 8.5 and was immediately fileted, BBQ'd, and guided to my mouth. 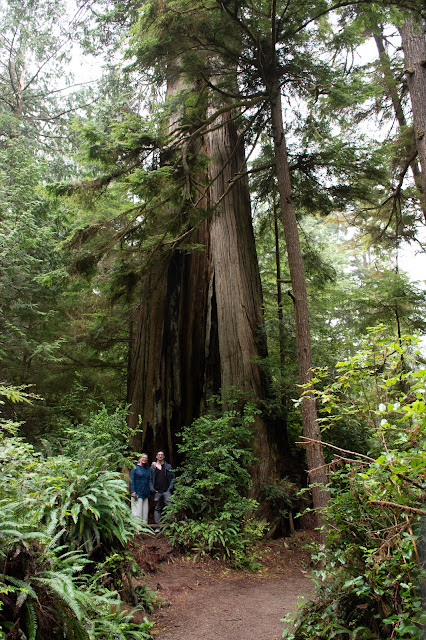 What adventure into a rainforest would be complete without posing for a photo in front of a giant tree? The answer is NO adventure ever! And so it was. It's hard to imagine that, not so long ago, train cars of the Olympic Line were loaded with giants like this one, freshly cut and ready for consumption around the world. Today, Olympic National Park is a refuge for these remarkable lords of the forest. 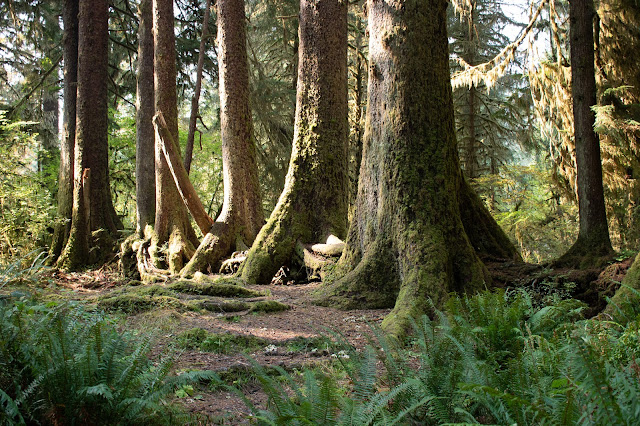 Look closely! Those trees are lined up in a row for a reason: They have all grown from, and on top of, their fallen "mother tree." How cool is that! 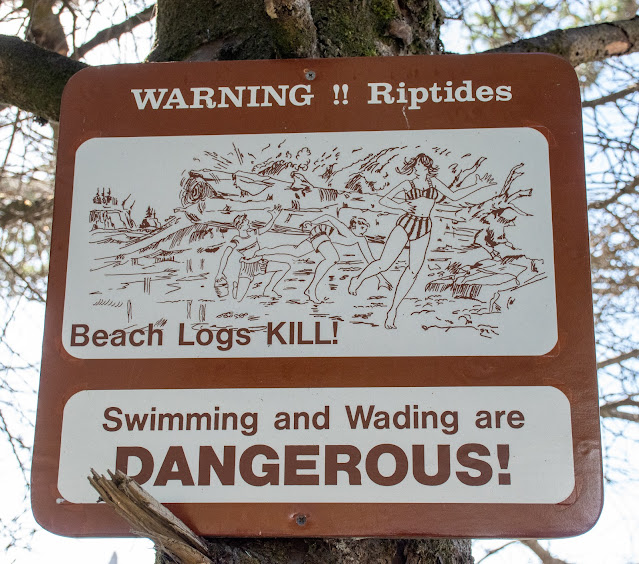 Holy logs, Batman! The Welcoming Committee at Rialto Beach has gone out of their way to make us feel right at home, don't ya think? Beware ... BEACH LOGS KILL! Swimming and wading are dangerous! Riptides!!!
I'm surprised they didn't include what my mom always said: "Swimming at Rialto Beach right after eating will put your eye out!"
Sea stacks at Rialto Beach on another BORINGLY sunny day. Hey! Nobody's ever taken this shot! (seriously, click the link). I Googled fun facts about sea stacks and didn't come up with much, but I did see the question, "Where can sea stacks be found?" Now THAT'S a head scratcher! 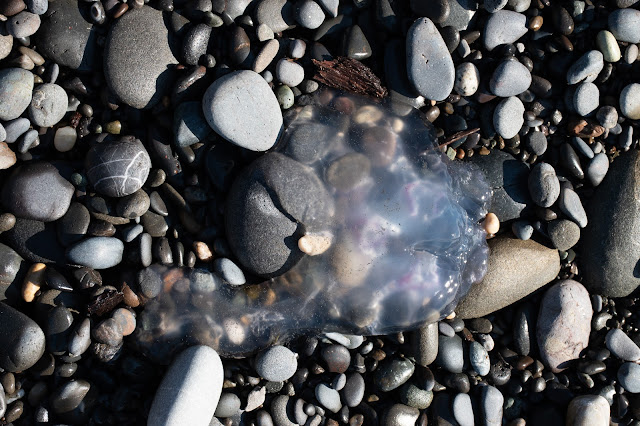 OK, I give up. What exactly IS this stuff? If you've been to the beach, you've seen it, but what exactly IS it?
Let's consider a few of the possibilities, shall we?
Is it? ...
We may never know. 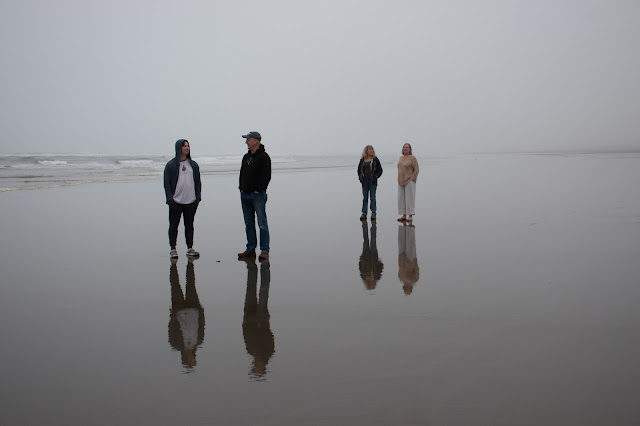 Our nine-day trip to the Olympic Peninsula and Olympic National Park ended at Long Beach where we met up with lifelong friends, Hal and Mindi Logan. After playing the dice game Farkle many times via video chats since March, it was a breath of fresh air to meet in person amidst our collective reality of pandemic living and all of the joys of quarantines. On this day, though it was misty, there was no wind, which technically qualifies the day as "Sunny!" on the Washington coast!

Well there you have it! The TourAlong Train is rolling back into the station and it's time to gather your luggage and prepare to disembark. Thanks for coming along with us to a new spot. Will we return? Yes, we will! Olympic National Park is EPIC!

I hope this respite let you forget—at least for the past 10 minutes—about the Tumultuous Train of Presidential Pandemic Pandemonium we've been so thoroughly entertained by this year. Where THAT train wreck ends up is anyone's guess. As for me? I'm going to stick to making sure the TourAlong Train stays on track ... and that you're along for the ride.

You can now return safely to the world of HYPERBOLE! 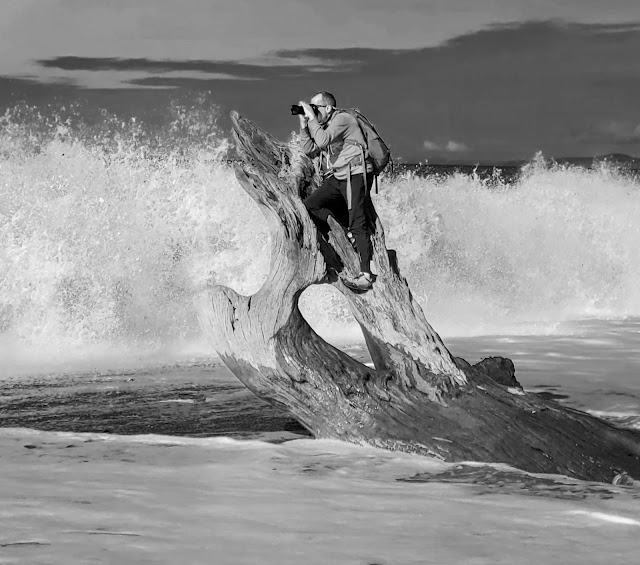 No perch is too high or too fraught with danger for the intrepid photographer! Simon snapped this photo of me shooting surf and mist at Dungeness Spit near Sequim. 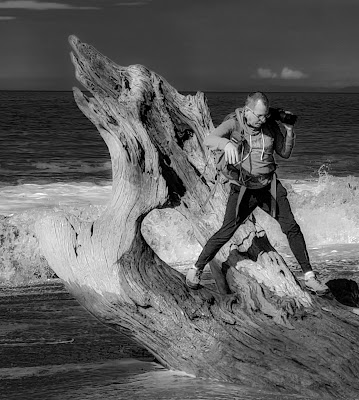 And now, it's time for another brief episode of FUN WITH NUMBERS!

This time, it's with AMAZON MUSIC!

We recently purchased an Amazon Echo Dot. You know, the fun little hockey puck device that surveilles everything you say in exchange for playing Amazon Music? Well, did you also know Amazon Music comes with 6 millions songs for free but if you pay Jeff Bezos $7.99 a month you get 60 million songs?

That's so AWESOME! Thank you Jeff!

But let's dig deeper via a math word problem, shall we?

If an average song lasts four minutes, and you have 60 million to listen to, how long would it take to listen to all of them sequentially if you're riding on a train that left Seattle on a sunny Sunday at noon and arrived in New York City the following Friday at 1:00 p.m.? (Hint: Remember to take into account the four-hour time zone difference, the Daylight Saving Time charade we continue to put up with, and the fact that it's never sunny at noon on a Sunday in Seattle!).

And the answer is?

I think I'll stick with six million songs for free! That's only 45.6 years of nonstop listening. I'd better get to work!

- October 31, 2020
Email ThisBlogThis!Share to TwitterShare to FacebookShare to Pinterest