OK... after the Snoqualmie show we drove back over the pass to Ellensburg for the night. That left an easy drive into the Inland Empire the following day.

The Spokane show at the Bing Crosby Theater - a relatively small venue - went well. Size was especially the case with the back stage space. So limited was it that all empty cases were staged under plastic on the sidewalk. 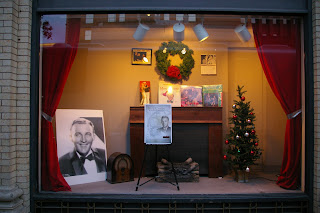 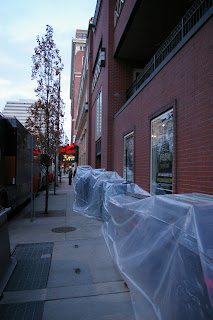 Packing Cases Under Plastic Outside the Bing Crosby Theater

The highlight for me was having friends on hand to watch the show. Specifically, Mike, Pam and Tate Johnson as well as Ryan, Michelle and Josh Johnson. In addition, old friends from Moscow, Erick and Kim Keating. It's funny, but few of these friends have ever seen me drum. After saying goodbye, we headed back across the state and towards Portland. Our evening's drive came to an end after hitting glassy-iced roads near the Columbia River.

Up at 11:00 a.m. and on the road at noon, the roads are clear as we travel to Portland. So far on this leg of the tour I'm on home territory, having traveled these roads many times before. Still, I'm amazed at how the landscape is changing around the Columbia Gorge as more and more wind turbines dot the top of the ridges.

By 4:00 we're in Portland and I'm dropped at Hal and Mindi Logan's home where Natalie is also staying for the next two evenings. A night off from the tour to visit with my better half and my best friends. Gin and tonics are on hand, as well as chili AND the BCS final game. Somehow, we actually manage to retire for the evening by mid-night.

Tuesday afternoon and Hal drops me off at the venue. Portland's Roseland Theatre isn't a fancy room, but by the time the show starts it's full of guitar heads and they are ready to go. We hit the stage and it's smooth sailing from there. The really fun thing is having Natalie, Hal and Mindi watch part of Joe's set from stage side as well as taking in a bit of the after show get together to meet Joe, Jeff and others. It's so hard to "tell" people what the experience like and far easier to have them experience it first hand. Of course, everyone REALLY misses out on the full experience because they don't get to sit in the van to drive hundreds of miles, watch movies and drink variable-quality coffee. 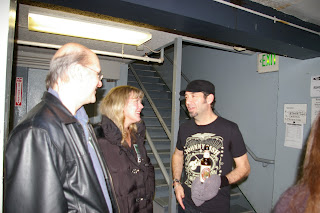 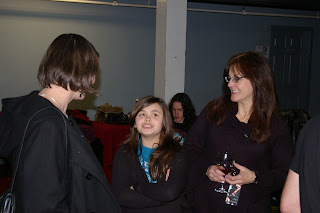 Natalie Chatting with Jeff's Daughter and Wife, Gabby and Christie, After the Portland Show
A day off between Portland and Oakland means I get to stay another night with Natalie at Hal and Mindi's place... although this time we don't call it a night until 3:00 a.m.

Up by 10:30 and Hal drops me off at the downtown Econo Lodge at 11:30 where I rejoin the others for the first portion of the 11+ hour drive to Oakland. By 11:30 p.m. we decide to stop at Red Bluff, CA. for the night. Our sleeping facility of choice for the evening is the Classic Motor Inn. It might have had class at some point in history, but today we're pretty sure it's one of the local meth dealing locations. We locked our doors and were happy to wake in the morning alive and without incident. Besides the parking lot activities, the Classic Motor Inn rates a 3 on the Dive Scale because there is no phone, TV remote, alarm clock or trash can in the room... never mind the pealing paint in the bathroom. 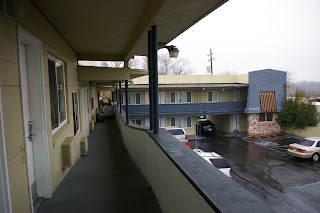 A Picture is Sometimes NOT Worth a Thousand Words... The Classic Motor Inn
A quick drive down I-5 and we're in Oakland. Tonight's show takes place at the Fox Theater... a really ornate old theater that's been fixed-up and maintained. The backstage green rooms and catering are first class all the way - with a friendly professional crew complimenting it.

No sound check tonight, so we hit the stage at 8:00 hoping for the best. As usual, it goes well and the crowd warms up nicely. Tonight, friends Brian and Carole Hunt are on hand to see us play. Brian was the creator of the Band DRAW in which I played a few years back and brought me my first real touring experience when we were the support band for Built To Spill during a 5,000 mile / 3-week tour in 2003.

So the buzz tonight is that Joe's got a friend who's going to make an appearance. You see, Joe started a side-project band a couple of years ago by the name of Chickenfoot. Members are: Joe, Sammy Hagar, Michael Anthony and Chad Smith. In other words, Chickenfoot is a powerhouse band. As it happens, Sammy lives in the bay area and came out tonight to join Joe on stage during the encore songs. As you might guess, the crowd goes wild and personally, I'm impressed with Hagar's vocals... I guess he made his fortune for a reason. Backstage he's a really nice guy and makes an effort to introduce himself to anyone. Two things I find surprising: (1) he's no taller than I. (2) He's 63 years old. Height doesn't lie, but I never would have guessed he's 63... maybe 45? 50? 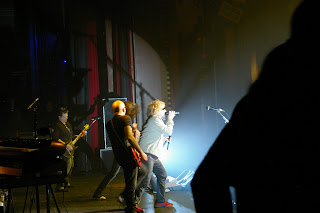 Sammy Hagar and Joe on Stage at the Fox Theater in Oakland
As I write we're moving out of town on our way to Reno, NV. ETA? 4:00 a.m., but the weather's good, we've got DVDs AND rooms at the casino that are at least three steps up from the Classic Motor Inn... AND SLOT MACHINES! Six more shows to go... this second leg is passing by WAY too fast....
- January 14, 2011
Email ThisBlogThis!Share to TwitterShare to FacebookShare to Pinterest