Sing Along Now... "Deep in the Heart of Texas"

After the Dallas show we take the much needed opportunity to check into a local Econo Lodge near the venue. Without the previous van's GPS we find ourselves navigating via a combination of Google Maps on Ned's smart phone, a poorly detailed map of the city on the back of the State of Texas Map we have on hand and, when all else fails, calling the motel for directions. The approximately three miles to the motel took the better part of an hour to reach. Oh well...

Wednesday afternoon we make the four hour drive to the Paramount Theater in Austin. Load in, set up, and we're set for another night, but this time in a city known for its music scene and enthusiastic audiences. We're not disappointed... we play and are rewarded by many with a standing ovation. The really cool thing for me was my cousin, Michelle, and her husband, Bill, were on hand to take in our show. I hadn't seen them in about 20 years, so it was nice to make the connection in these circumstances... they had never seen me drum. Michelle said my Dad mentioned to her that, "he'll just have to get it (drumming) out of his system." I told Michelle he'd better not hold his breath. 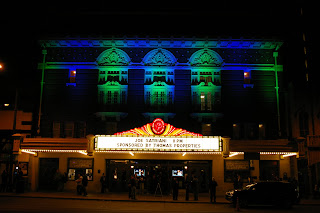 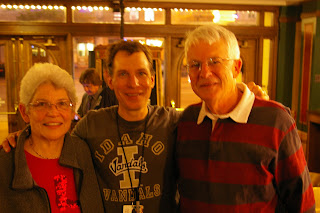 Cousin Michelle, Moi and Bill - Post Show in Austin
﻿
﻿The final night of this odyssey was in Houston, just 3.5 hours down the road. Normally, this would have meant we could sleep in Austin and make the drive the next day. However, Ned's co-manager Sandra once worked for NASA. As such, she was able to secure a private tour of the Johnson Space Center for us and members of Joe's band. Thus, we made the drive to Houston in the wee hours of the night, arriving at the Hilton just across the avenue from the Space Center's entrance. Like all too many nights, my head hits the pillow at 4:30 a.m.


The wake up call comes at 10:00... time to shower, dress and get downstairs to take in the buffet breakfast before heading off to the tour. Jeff Campitelli, Joe's drummer, and Allen Whitman, Joe's bass player, taxi in from their city center hotel and join us at NASA. Our guide for the two-hour tour is Astronaut Steve Robinson. We learned that this type of personal tour is unusual.. Sandra knows Steve and was able to pull the strings. Steve's been aboard Space Shuttle flights four times. He's gracious, knowledgeable and just an all around nice guy as he takes us into the Apollo, International Space Station and Space Shuttle command centers as well as a tour through the mock-up facility where astronauts do some of their preliminary work before moving on to the simulators and underwater training facilities. Probably the most surprising revelation of the day is just how small the crew quarters are on the shuttle... kind of like seven people confined to a 200 square foot area. There is NO privacy in the shuttle. In fact, when using the toilet, cloth pull screens serve as door and ceiling. Hmmm... I wonder how often beans are on the menu. 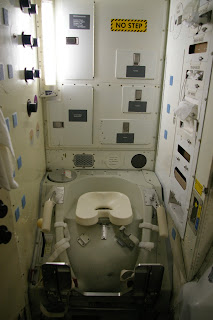 The Space Shuttle Toilet - Small and NOT So Private 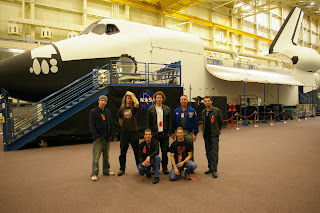 The Johnson Space Center Tour Gang
Space Center tour complete, we're off to Houston's House of Blues for the 28th and final performance of the Joe Satriani Wormholes and Wizards North American Tour; we're exhausted. We set-up and sound check one more time. We take in the catered dinner one more time, along with a bit of nodding off, clowning around, finding coffee and warming up... one more time.


And then we hit the stage, one more time. Moving through the set I'm a bit bumpy here and there, but nothing people will notice and it all goes well. As we begin our closing tune - Sons and Daughters - I notice Ernesto, Joe's light technician standing off stage-left with a pole of some type. He looks like he needs to use it to push something out of the way. Off stage-right I notice Mick, Joe's manager, watching us. Suddenly Ernesto comes out on stage. The "pole" is a push broom and he's "sweeping" the stage. From stage right, Deiter, Joe's merchandise sales manager, steps on stage in his boxer shorts pushing a vacuum cleaner. Behind him comes Joe, not so cleverly disguised with his signature cloth cap pulled down, handling the vacuum cleaner's cord. We're surprised and laughing as we try to play while watching their stage shuffle. Many in the crowd recognize Joe and cheer and take pictures. Off stage, Allen and Jeff are taking pictures as well. I guess when the headlining band pulls a fast one on you during the final performance, you've done alright. 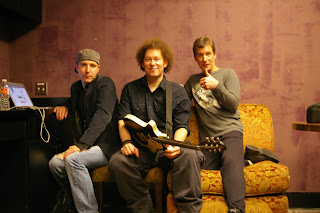 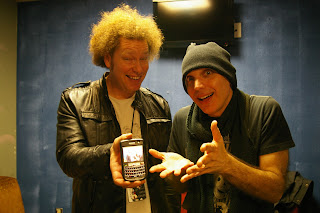 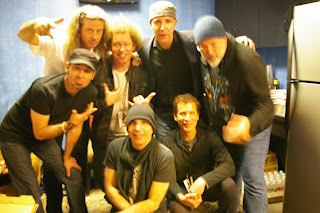 
After the show we say our goodbyes to Joe's crew and band. It's bittersweet because we've really gotten along well over the past two months. So thanks to Joe, Jeff, Allen, Mike, Galen, Mick, Arthur, Deiter, Jim, Lindsey, Ernesto, Mike, Glade, Russ and Whitney for their camaraderie and professionalism. I'm especially going to miss watching them perform each night from the stage wings... and miss watching Jeff attempt his stick toss at the end of each night.


As for Ned, Malcolm and I? While lack of sleep, eating challenges, and numbing drives were certainly a characteristic of the tour, so too was the quality of our 30 minutes each night on stage and getting along well together off stage. Special thanks to Dave for managing our equipment on and off stage in such a fine manner and for serving as impromptu road manager. And thanks to Burt for moving us about while we watched DVDs in his van. And A HUGE thanks to Natalie for her enthusiastic support in my doing this.


There's already talk of new projects in one form or another... and their time will come. For now, it's time to decompress, sleep, and enjoy being back home.


Thanks for coming along on this adventure...
- January 21, 2011
Email ThisBlogThis!Share to TwitterShare to FacebookShare to Pinterest