Back in the Saddle Again

Two weeks off for the Holidays seemed like a distant past after the first 1.5 hours back in the Van. Burt, Dave, Malcolm and I depart from Boise mid-afternoon on Friday and six hours later check in a the Quality Inn in Ellensburg, WA., our stop for the night on the way to Snoqualmie, WA. where we'll meet up with Ned for Saturday night's show.

Saturday afternoon we're floating over Snoqualmie Pass and arrive at the venue - The Snoqualmie Casino - with time to spare. So much time in fact that we enjoy watching the Seattle upset New Orleans in the first Wildcard Playoff game and then watch much of the Jets - Baltimore game before it's time for our sound check and show.

Joe's band played four shows in Western Canada earlier in the week and, as we learned, had weather to deal with between shows. One night's drive was interrupted by closed roads and tour buses sliding around. For one show, they arrived at the venue at 5:30 p.m. and still played on time... it's no small feat to get a show set-up in 2.5 hours.

We were welcomed back warmly by Joe, his band and crew; they really make us feel like we're a part of the whole deal and not just "the support band." And, joining us as our special backstage guest, was Sandra Prow. Sandra was in Seattle for part of the Holidays and it was nice to see her and thank her in person for her support of the tour. 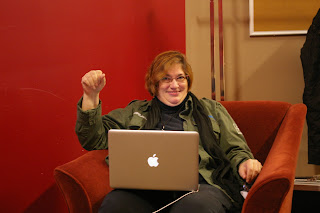 Sandra Prow - Ned Evett and Triple Double's Co-manager - Visits Backstage in Snowqualmie
The Snowqualmie show goes well and, after the CD signing session, we take part in the American tradition of fine casino buffet dining. On tap in the buffet was the lobster tail...  ummmm. With the first show of the second leg under our belts, we head back over the pass to our motel in Ellensburg.﻿ 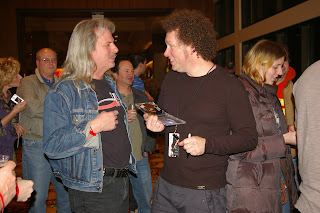 ﻿
- January 09, 2011
Email ThisBlogThis!Share to TwitterShare to FacebookShare to Pinterest