From the Lands of Gambling and Movie Stars... to the "OH!, Let's Add a Twist at the End"

We arrive at Reno's Grand Sierra Casino at 4:30 a.m. in a silly mood after the drive over Donner Pass. As we check in, we note a few gambling diehards diligently working the slot machines. We're more than pleased to learn that we each have our own room for the next two nights courtesy of the management. My view from the 11th floor boasts mountains to the right, the airport to the left and, just below, a large square cement water holding pond. Never passing up an opportunity, the casino has constructed small islands in the pond onto which golfers can hit balls. 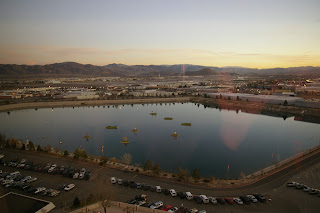 Golf Anyone?
I'm up early at 11:30 to tend to some works items back home and, after a late lunch (a fine battered deep-fat fried Monti Cristo sandwich), we're off to the casino's Grand Theater to set up for the night's show.

The theater is enormous. The backstage area is possibly twice as big as the entire Crosby Theater in Spokane. In fact, there's a large scale replica of a passenger jet used for a show production of some sort. We wander in and out of the theater waiting for our set up and sound check. 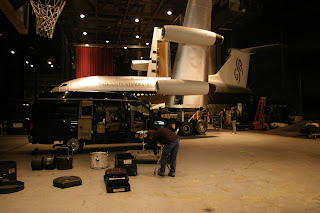 Airport Hanger? Nope... It's the Enormous Backstage at the Casino's "Grand Theater"
At 5:00 I'm on stage talking with Jeff Campitelli and he asks if I'd like to sit at his drum kit. Jeff's kit is really nice, but that's not the main attraction. Instead, it's his monitor system I want to experience. Jeff has a monitor mixer just behind his left side which he uses to mix his own stage sound which he hears through headphones throughout their show. Headphones on, I start playing the kit a bit. As I do, the rest of Joe's band take the stage for their sound check and begin playing along. The next minute I realize Joe's on stage as well. Trying not to drop a stick or the beat, I think to myself, "DUDE! You're jamming with Joe, Allen, Galen and Mike!" The sound through Jeff's headphones is nothing but fantastic. I can hear everything perfectly and can control the volume to suit my fancy. Wow... After maybe three more minutes I relinquish the throne to Jeff. They've got work to do... and I'm pretty sure, despite my efforts, Jeff will remain Joe's drummer.

The stage is very wide and playing on it is kind of like watching a movie on the wide screen option. We play well and enjoy the rest of the evening backstage goofing around on the baby grand piano in our dressing room. 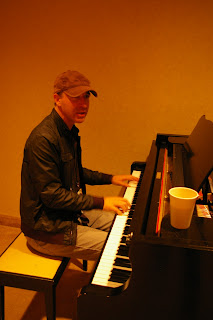 Malcolm Entertaining Us in Our Dressing Room Post Show
None of us go to bed when we should and the morning comes around far too soon... we've got an eight hour drive to Las Vegas ahead of us. Along US Highway 95 we're treated to desert landscapes (they're pretty) and odd run-down towns (they're ugly). Tonopah stands out as one in which I wouldn't want to live. Still, we remorse we didn't get to spend the night in the town's standout accommodation - The Clown Motel. More miles down the road we pass by the Nevada Test Site... just over the mountain ridge to our left hundreds of atomic bombs were detonated years back... we feel all warm and glowy inside.

As we drive the Las Vegas Strip to Mandalay Bay Hotel and Casino (and the night's venue - the House of Blues) I think how strange it is that so much money has been spent to create extravagant facades yet inside each one the theme is the same... acres of slot machines, bars, gaming tables, buffets and sleeping rooms.

This will be my second time on Mandalay's House of Blues stage (the first with DRAW opening for Built To Spill). It's a compact room and is packed for tonight's show. Again, it goes well for us and is special because Dave (our equipment technician and all-around road warrior) has his father, brother and sister in the house for the show. Nice folks! 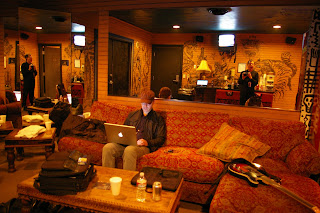 Packed-up and we're on the road at 1:30 a.m. for the 4.5 hour drive into Los Angeles. I say "into" because after reaching the greater city's limits, the drive to where ever you're headed goes on and on and on... Our drive ended at a nice Econo Lodge in Anaheim and my head hits the pillow at 6:00 a.m. 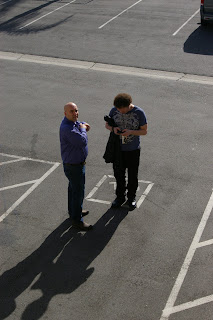 Guy and Ned Meet Up in the Econo Lodge Parking Lot - A Warm Sunny California Day
NAMM (National Association of Music Merchandisers) holds two shows annually, the largest of which is always in L.A. The best way to sum up NAMM is "acres upon acres of toys for musicians." Ned's meets with a number of contacts to talk about future plans while I look at approximately 1.5 million drum sets. OK, that's an exaggeration, but one kit had 34 drums for players who possibly need to compensate for other short comings.

We make the 40 minute drive from Anaheim to downtown L.A. for the show at the Orpheum Theater - another classic/historical performance space - and arrive on time - and  just it time - to set up and do a 1-minute sound check before the stage goes dark for union-rules dinner time.

I know I keep saying "the show goes well.." but I do so because they do. Early on in December we hit our stride and play at a consistent, upward, level. Tonight's performance is especially gratifying because we're playing to a near capacity audience in L.A. - certainly a show business center - and they like us. We sell a bunch of CDs and add many new Facebook fans... I'm exhausted from the lack of sleep but satisfied with the day.

Unfortunately, sleep won't come for a while as we have to start the VERY long drive to Dallas. We say goodbye to L.A. and head east on US Highway 40. At 4:30 a.m. we check into a motel in Pinnacles, CA. Monday morning arrives (at noon) and we take time to do laundry and eat before continuing the drive across the desert.

And we drive and drive... as I write, we're somewhere in Arizona watching Lawrence of Arabia. We thought the choice seemed fitting enough.

Three shows to go... and we're still having fun.

A couple hours after writing the post above, we make a dinner stop in Gallup, NM. Actually, we ROLL into Gallup because the van's brakes have stopped working. We come to rest in a strip mall parking lot and huddle in a nearby Denny's to figure out what to do... it's 10:00 p.m.

After many phone calls we've found a flatbed tow-truck willing to take us to Albuquerque, 150 miles to the east. We have to negotiate a bit with Steve, the driver, because his truck has seat belts for four passengers; there are five of us. That detail settled, we cram into the truck's cab at midnight and arrive ABQ at 2:30, drop the van off at a Ford dealership and, nicely enough, Steve drops us off at an Econo Lodge a mile away. 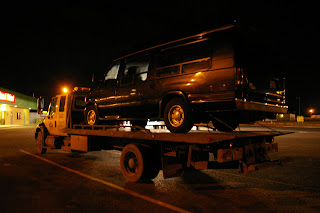 The Van and the Tow Truck - From Gallup to Albuquerque 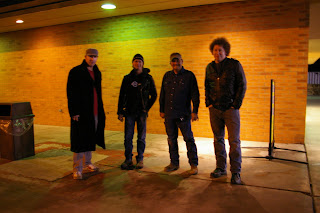 Malcolm, Dave, Steve the Tow Truck Driver and Ned - Somewhere Enroute to Albuquerque
During the drive, Ned, with manager Guy's help via cell phone, secure a 15 passenger van from National Car Rental. But, in order to make the schedule work, we have to pick the new van up at the airport at 6:00 a.m. So, we get two hours of "sleep" before we have to be up and take a taxi to the airport. 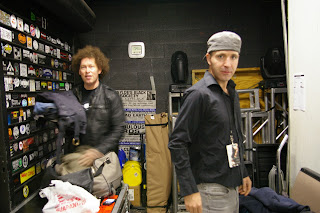 Ned and Malcolm Getting Set to Take the Stage in Dallas
- January 18, 2011
Email ThisBlogThis!Share to TwitterShare to FacebookShare to Pinterest