Hey, I've Got and Idea! Let's Drive All Night!

Clear skies and dry roads make the final five hours to Denver seem like a breeze and we roll into the Mile High City with time to spare. The Historic Paramount Theater, in the heart of downtown, is typical of many previous venues - a rustic but well decorated performance hall. After making a run at the catering room for dinner, we get set up and actually have time to sound check by running through two songs. 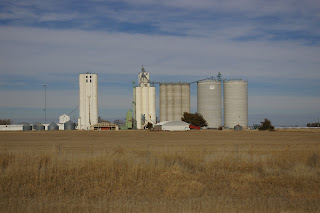 There's One of These Every Five Miles in Kansas 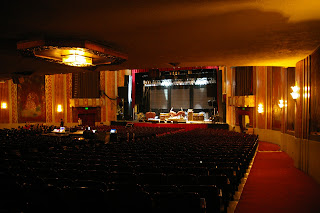 Inside the Historic Paramount Theater

Show time and our set goes really well - possibly the best of the 18 nights. We pull the audience in with the first few tunes and Ned swoons them with Hallelujah. We finish them off with Sons and Daughters. Twice my left stick gets caught underneath my left crash cymbal, threatening to bounce it out of my hand. My now infamous Ninja-like reflexes keep disaster at bay. At the CD signing in the lobby we're complimented with comments like "tight," "really big," and "you guys rock!" These are the things that make it worth the effort. 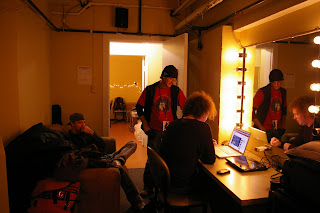 After the Show - Malcolm, Dave and Ned - Before the Drive

Speaking of effort, like nearly all nights, we end the night by getting in the van and driving. Our plan is to drive to the Salt Lake City area, sleep, and finish the drive home the next day. However, not far west of Cheyenne, Wyoming, we drive into glassy-iced roads, fog and then snow. Here's the deal: southern Wyoming has an elevation of about 6,500 feet and Interstate 80 is notorious for closing due due winter storms. In fact, there are barricades about every 30 miles poised to swoop down accompanied by signs stating "Exit here when lights are flashing." Our fear is being caught halfway across the state in a storm and not getting out until early spring. So, at 3:00 a.m., we decide to push through. As day breaks we cross into Utah after passing about a dozen semi-trucks skidded off the road (someone's not getting their Christmas presents on time) along with a few cars.

At 9:30 we arrive at Ogden, Utah, and, to celebrate our successful passage, we take a break for breakfast before piling back in the van for the final 4.5 hours to Boise. At 4:00 p.m., we're unloading the van. We've been awake, more or less, for 30 hours and we're beat.

After 27 days on the road, we've driven 11,000 miles. That's an average of 407 miles each day. That's kind of like driving from Boise to Portland every day and then playing a 30-minute set. Would we do it again? Sure, why not? And we WILL in two weeks - starting in Seattle on January 8 and ending in Houston on the 20th... ten more shows with Ned, Malcolm, Dave, Burt along with Joe and his gang.

So join up again to TOUR ALONG WITH TODD in the new year. Until then... Happy Holidays!
- December 24, 2010
Email ThisBlogThis!Share to TwitterShare to FacebookShare to Pinterest