Wow, Pittsburgh seems like such a long time ago. Venues are blending one into the next... Let's see.... Oh I remember! Our dressing room was ancient and sparse. Down the hall was a shower and toilet but no sink to wash hands. Joe and his crew had somewhat better accommodations and catering was an all plastic affair - plastic plates, cutlery, table "cloths" and cups - in a small cramped room. Still, the steamed vegetables and rice were the welcomed favorite for me. The concert hall was another classic beauty and was fun to play on although it wasn't my best night... kind of off here and there. What's one to do? Drive to the next city, of course. And that we did...

As has been our common practice to date, we drove a couple hours and landed at a Sleep Inn just south of Cleveland, about half-way between Pittsburgh to Cincinnati, at 4:00 a.m. Quickly learning to work the system, I request a wake-up call for 9:00 so I can take advantage of the complimentary breakfast and then go back to sleep until our late check-out time at 1:00. The waffles were worth being woke up.

The venue in Cincinnati is a modern concert hall with top-notch facilities throughout. The loading bay is inside the building, the dressing rooms are nicely appointed and catering has quite a spread. Even our dressing room has been outfitted with a tray of cold cuts, cheeses, a 12-pack of Stella-Artois, bananas and cans of tuna fish (I'll explain the tuna fish in another writing).

The show went quite well but what we heard and what the audience heard for at least the first two tunes varied. Here's the deal: At virtually all venues, the support band's sound is mixed by the local sound engineer and NOT the sound person with the headlining act. This is problematic because the local sound person has just a few minutes during our sound check to become acquainted with the headlining act's sound board. Are you with me so far?... OK, so this means that we're at the mercy of the local person's ability to quickly get in sync with the sound board or we stand a chance of sounding like crap. On the other hand, the sound WE hear on stage is mixed by the headlining act's stage monitor engineer, so WE hear one mix and the AUDIENCE hears another mix. As it turns out this night, the audience was treated to an "odd" house mix heavy with hi-hat and light on Ned's guitar and vocals for a bit. Apparently it got sorted out in the end. 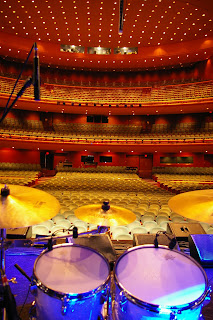 My View from the Stage in Cincinatti
(note: drums are not blue... stage lighting is at work here) 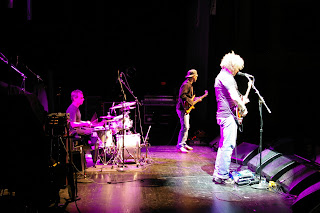 On Stage Warming the Audience Up in Cincinnati
With bags packed, we TRY to get a jump on the night’s drive but to no avail. The van’s batteries are dead. It couldn’t have happened in a better place: in the drive-in loading bays. A quick call to AAA and Bert has the van working again. 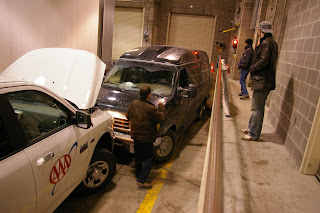 AAA to the Rescue!
From we drive north seven hours where, after braving lake effects, middle-of-the-night, snow showers, we land at Judy’s Motel in . Judy has a nice house next to her motel and we’re pretty sure that’s where the profits are spent. The room rates a 4 on Todd’s Dive Scale due to the lack luster and musty accommodations, bare-bones cable TV and the fact the shower has no shower curtain… a certain formula for a mess… and the mess does ensue in floods. 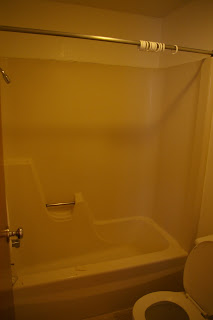 Look Ma! No Shower Curtain!
After 3.5 hours of sleep, we’re up and on our way to . We fear the border crossing simply because we’re a band in a van. Bands have morbid tales of time spent at border crossings as the gendarmes go through every bag, case and piece of equipment. Luckily, we breeze through. Funny story: Dave approached the gate and inadvertently drove through the stop sign asking you to wait until waved to approach. The border guard asks Dave, “Where are you from?” Dave replies, “.” The border guard asks, “Do they have stop signs in ?”
The concert is at Massey Hall… a first class facility and the catering was to die for. The show went well and afterward, we met a couple of Malcolm’s friends: Corky Laing, the drummer for the band “Mountain.” (recall the tune “Mississippi Queen”) as well as Eric Schenkman, the guitarist for the Spin Doctors. Nice folks… but after a visit we have to go… first back across the border and then back to another comforting night at Judy’s. 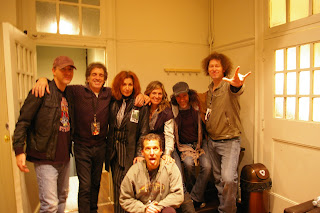 From left to right: Malcolm, Corky Laing, Taffy, Sarah, Eric Schenlman and Ned
By 9:00 a.m. we’re back on the road traveling across upper on our way to . Beautiful countryside even in winter’s subdued colors.
’s House of Blues was predictably nice… maybe not the best catering, but good.
NOTE: By now you get the sense that the quality of any day is judged in part by the quality of the catering… the only real food we see each day.
The crew is very helpful in making us feel welcomed as does the crowd. Each night we’re playing more and more as an ensemble and audiences respond. Tonight, Ned kills ‘em with his “Moon Shadow” guitar solo during Cohen’s “Hallejulah.” 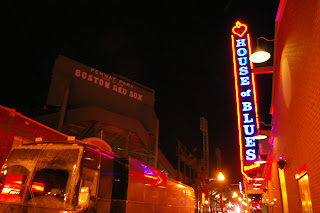 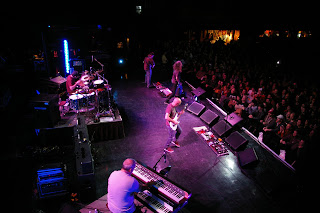 Joe and Company Doing Their Thing
After the show,  pack up and start the eight hour drive to . Our stop this evening/morning is the Econo Lodge somewhere about halfway. It’s clean, well priced and offers breakfast. Even though it’s 4:00 a.m., I make the decision to ask for a wake-up call at 9:30 in order to make myself a waffle at the complimentary breakfast bar… after that it’s back to sleep.
Traffic is a pain in , and again when bypassing . Still, we get to the venue in time to set-up and to do a line check. The show was good and the crew was very helpful. Catering? It ranked an 8.
At Midnight we begin the now too common all-night drive. This time it’s north to and another Econo Lodge. The rooms are a bit old, but there’s free wi-fi, in-house laundry facilities AND an Italian restaurant next door. More importantly, we forced the overnight drive for one reason: Sleep…  I slept from 9:00 a.m. until 6:00 p.m., got up and did laundry, ate and will soon sleep again – for a WHOLE NIGHT!
Tomorrow we make the two-hour drive w/border crossing to Montréal and the show at the Metropolis…
- December 09, 2010
Email ThisBlogThis!Share to TwitterShare to FacebookShare to Pinterest