The night at the Strathmore seems sooo long ago. However, I do remember we were well received and were greeted by a line of concert goers after our performance to sign CDs. We had an official roped-off area for the signing... I keep reminding myself not to get used to it.

As goes tradition, we end the night by driving... this time 4 hours north to the Pittsburgh area and another Econo Lodge - halfway to tomorrows concert in Detroit.

It's easy to forget, but there remains an industrial belt along the southern shores of the Great Lakes - and this is especially apparent along Lake Erie. I've never passed by a steel mill. Besides being a massive facility with steam and smoke and piles of raw ingredients waiting to be consumed, there's an equally sized power production facility right next door. I can only imagine this panorama at the industry's peak.

The night's performance at the Fillmore Detroit goes really well. Detroit has long been associated with Rock music... and the local audience certainly fills its role as a rock loving crowd... and Ned signed a bunch of CDs. 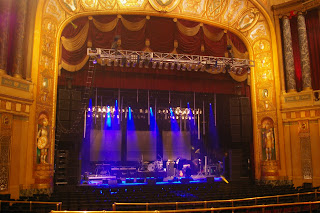 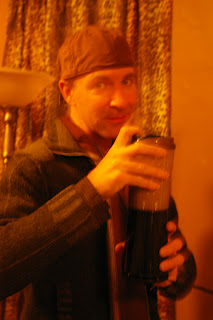 Friday night's show at the House of Blues in Cleveland goes well too... Earlier in the day we received a Twitter request from a local Ned fan asking us to play Red Red Room. Sure enough, Ned acknowledged the request and the guy was in the audience... and yes, we played Red Red Room.. 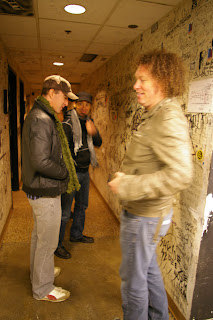 Today while driving to Chicago I see more of the Rust Belt... and a bit of downtown Chicago as we arrive at the Hampton Inn... our second real hotel of the tour...

Tonight was the tour's official party... to which we were invited. It was a casual affair at an Italian restaurant a short cab ride away. The food was remarkable, but no more than the 2005 vintage Cabernet and olive oil pressed yesterday at Mick Bridgen's Sonoma, CA. vineyard/orchard (Mick is Joe's manager). Had I not known, this could have been a party for nearly anyone... 20 or so mostly middle-aged men - only two with really long hair - and a lone woman (Lindsey) hamming it up. Yet the people at the table have been in the Rock business for decades. Across from me sits Arthur, Jeff's drum technician... mild mannered, with short white hair, in his late 50's perhaps. Art's the person who makes Jeff's life easier by setting drums up, tearing them down, and a bunch of associated stuff in between. Art's done a lot; early on as a member of Bob Dylan's small road team, then work with iconic rock promoter Bill Graham, the band Jefferson Starship and many others. He also worked as a videographer for 60 Minutes from 2000-2002. And that's just Art... similar histories are seated around the table. 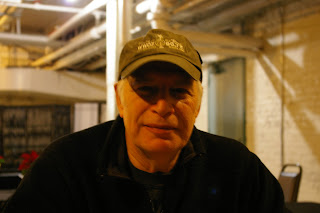