Onward - Into the Cold North

The show in Clearwater Fl. is at the Ruth Eckerd Hall. It's a really top-notch facility. The dressing rooms are pimp, catering's great and security if funny... In order to mingle with the crowd between our set and Joe's, Ned and I have to be escorted to the lobby where we (well, mostly Ned) sign sleeves of newly purchased Ned Evett "Afraid 4U" CDs. Our escort, a perfectly nice young man, stands watch until we're done and then escorts us back. Based on all of the autographed photos of big name performers who have graced the hall's stage (including Joe), I think they're used to maintaining a higher level of security than might be needed for us. 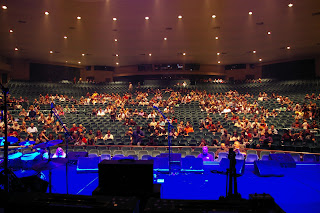 Packed-up by 12:30 a.m., we drive north for three hours to Starke, FL., where we settle in for some rest. Before heading north we take a bit of time to do laundry and actually relax in the 70 degree Florida sun. Alas, all good things come to an end... By midnight we're somewhere in the West Virginian mountains driving through a raging snowstorm. By 3:00 a.m. our stop for the evening at Summersville, W. Va. is at hand. It's nice to see the sign of the Sleep Inn come along. A few more hours on the road and we arrive Pittsburg for Monday night's show. 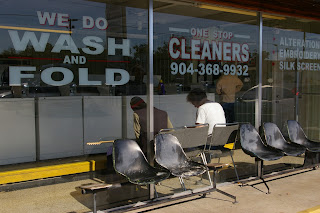 Along the way I've had time to do the numbers and have concluded that fully one-half of all Americans are employed as truck drivers, fast-food employees or work in the hotel/motel business. The infrastructure built to support our ability to drive and move consumables is enormous. Homogeneous and enormous.

The shift from relative warmth to cold was anticipated but is a shock all the same. Luckily the van is equipped with heat and comfy blankets. A myriad of movies to watch keep Ned, Malcolm and I occupied for hours at a time.

Monday's night's performance went well. Each night on stage goes by so fast - just six tunes and that's it... hit it, hit it hard. Warming up before playing is mandatory. And nearly every night after performing and doing our lobby meet and greet, I take time to call Natalie. Unlike past tours, this time I have Skype and a cell phone to visit with her. Turns out space age communication is quite convenient. In fact, I'm able to access the Internet via Ned's Blackberry/Verizon wireless access while we're in the van. And, once at the venue, we have Internet access via Joe's satellite "satchnet" wireless network. It's all pretty cool.

And the pattern of the tour has officially settled in: Play the show, pack-up, drive until 3:00 or 4:00 in the morning, sleep, partake in the motel's complimentary breakfast if available, sleep a couple more hours, check-out, drive to next venue (1-4 hours), set-up, RINSE AND REPEAT.

So here I am in our greenroom in Cincinnati getting ready to set-up, do a sound check and play... and drive... once again... but it's fun.
- December 07, 2010
Email ThisBlogThis!Share to TwitterShare to FacebookShare to Pinterest