Another overnight drive begins after the Atlanta show. We roll into Lake Buena Vista (Disneyworld area) and check into the Paradise Motel at 9:00 a.m. It's a funny swing cycle...  just hours before we were full of energy and satisfaction with our first night completed. But after sitting in a van through the night we're completely burned out and grumpy... well everyone except Ned who can seemlingly sleep at any time in any condition.

As for the Paradise Motel: It turns out "paradise"  is a relative term. In this case, we book five rooms for two nights for $240 total. That's the good news. The bad news is cheap rooms come at a cost. On the "dive" scale where 1=total dive and 10=just below a room at a Comfort Inn, the Paradise rates a 4. The rooms smell like a bad poker party and it's best to simply sleep on top of the bed spread. The bathroom towels have, in theory, been laundered. The good news is we each have our own room for two nights. 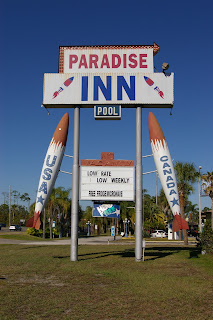 The Paradise Motel - With Rockets!﻿ 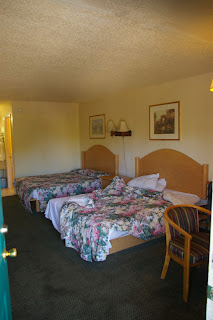 With three hours sleep, we take to the road for the 3.5 hour drive to Pompano Beach, just north of Miami. While the rest of the nation has been inundated with wintry weather (as will we in a few days), southern Florida is more like spring with mild temperatures and swunny skies. This is forunate as the concert is at an outdoor amphitheater. 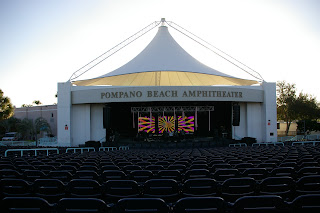 The Amphitheater at Pompano Beach﻿ 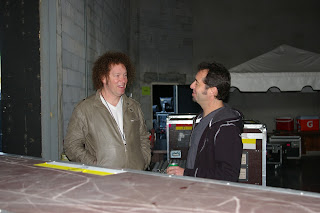 Ned and Jeff Campitelli - Joe's drummer - chat it up﻿
Our second performance went really well, lots of energy and an appreciative crowd. The crowd cheered and wanted more as we ended our set. Opening acts are not allowed to play encore numbers. In fact, our job is to do exactly what we did - play well and get them warmed up and in the mood for the headliner. Mission accomplished!

Funny thing: After the show there were some visitors backstage. They looked like they had something to do with the Rock business. Turns out one of the group was Nicko McBrain - the drummer for Iron Maiden. He said something about liking my playing... at least I want to think he did. The night before, in Atlanta, Doug Wimbish - the bass player for the band Living Colour - was in the catering room after the concert. Doug's worked with Madonna and the Rolling Stones and many others.

Back into the van and we return to Lake Buena Vista. Arriving at the motel at 4:00 a.m. the inadequacies of the "Paradise" fade away as much needed sleep sets in. By 1:30 p.m. (it's Friday now, right?) we're back in the van looking for Starbucks and then making the short drive to Downtown Disney and the House of Blues.  I'd been there once before when Natalie, Simon, my brother Marc and his daughter Diana made a June trip when the kids were young. This feels like familiar territory. 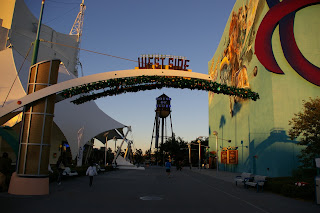 Downtown Disney and the House of Blues 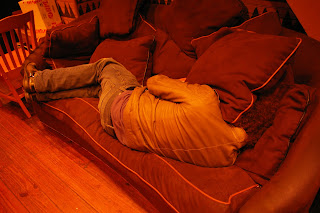 Catching Sleep as Catch Can - House of Blues Green Room
Unfortunately, Joe was behind schedule tonight. This meant, as the support band, we were also behind schedule because we can't make a move until his band has their sound check done. As a result, we had just enough time to set our gear on stage and make sure the microphones worked (a signal check); no time to run through a song to see how the levels were - just set it and get off stage. So it goes... but we played fine and the crowd enjoyed it even if we couldn't always hear what we were doing.

Joe's on stage stirring the crowd into a frenzy right now. Tonight we'll have another fine sleeping experience at the Paradise Motel and then drive west to the Clearwater/Tampa Bay area tomorrow for our final show in a mild climate. After that it's north into what the Weather Channel has been describing as a snow-covered frozen hell-hole. I'm glad I packed my long-johns!
- December 03, 2010
Email ThisBlogThis!Share to TwitterShare to FacebookShare to Pinterest