A Tale of Two Cities

The weather's working in our favor... it's rainy and relatively warm. This is a good thing as just days earlier the forecast for the Montreal region was snow and more snow. We depart the Econo Lodge in Burlington and make the border crossing without incident an hour later, although this time we had to exit the van and sit inside the building for 30 minutes while they run our passports... I think they just want to see if any of us gets nervous/anxious. Another hour and we're swooping into Montreal and the Metropolis concert hall. I've always liked Montreal and while this is my first winter visit, I still enjoy the general atmosphere (or I guess I should say, "ambiance" with an accent, n'est-ce pas?

The venue is a beehive of activity as the video crew is on site to record Joe's performance for a DVD... in HD and 3D. As we're now used to, we have time to set-up and do a quick line check before vacating the stage. Dinner and pre-show warm ups done, we go on at 8:00. Tonight's crowd is already in the mood and our job is easy. The stage and hall sound is superb and we thoroughly enjoy our time. 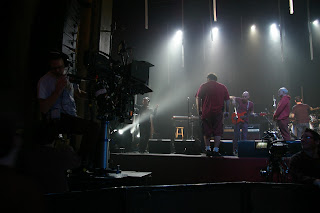 The Camera Crew Prepares to Record the Show A Peek Inside the Recording Truck - Recording in HD and 3D

We stay long enough to take in most of Joe's set before driving back to Burlington. The rain is heavy and persistent and is complimented by ground fog. Man-o-man we're happy it's not 10 degrees colder. With our final border crossing accomplished with ease, we roll into the Burlington Econo Lodge at 2:00 a.m. only to find our room key cards no longer work... a minor inconvenience that's remedied in 10 minutes or so.

Four hours later we're slogging our way out of bed, packing up and getting ready to drive the six hours to New York City. Our concern is simple: we want to time our drive into the heart of the city to avoid traffic problems as much as possible. The travel gods are on our side as we slide into Times Square where both the venue and our hotel are located. Sandra Prow - long time friend and supporter of Ned - has managed to arrange rooms at the Hilton Times Square... our first real hotel of the tour... and we love it. A big shout out to Sandra for making this happen! The venue - the Best Buy Theater - is just a short block away. Times Square is an odd and amazing site, even in the cold of winter. The police presence in the Square area is heavy... squad cars, vans, foot officers. This is apparently a result of the thwarted car bomb attempt last year. It's probably the safest place in the city today. 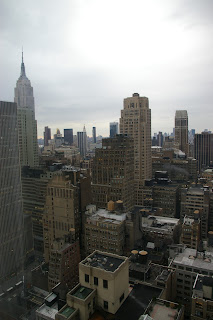 Our View from the 42nd Floor of the Hilton Times Square 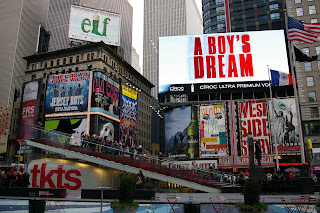 Both Monday and Tuesday night audiences are a little tough. Unlike most nights, many concert goers are still arriving at the venue when we hit the stage. Still, by the time we are halfway through our set the audience is warming up to us and seem genuinely enthusiastic at the end.

After Monday's show we take time to relax, go to a nearby club for drinks/music and then to a restaurant for a midnight meal. After Tuesday's show we're not so lucky... we have to pack-up and drive south. At 4:00 a.m. we check-in to another Econo Lodge just outside Bethesda, Maryland. And I've picked-up the sniffles... not a surprising development given our schedule the past few weeks. I'm drinking orange juice at every opportunity.

Tonight we play at Bethesda's Strathmore Music Center - a top of the line concert hall in every way. For us, it's nice just to be at the venue with time to relax and decompress - in Simon speak, that's "chillax," and it's a good thing because the final week of this portion of the tour is relentless.
- December 15, 2010
Email ThisBlogThis!Share to TwitterShare to FacebookShare to Pinterest